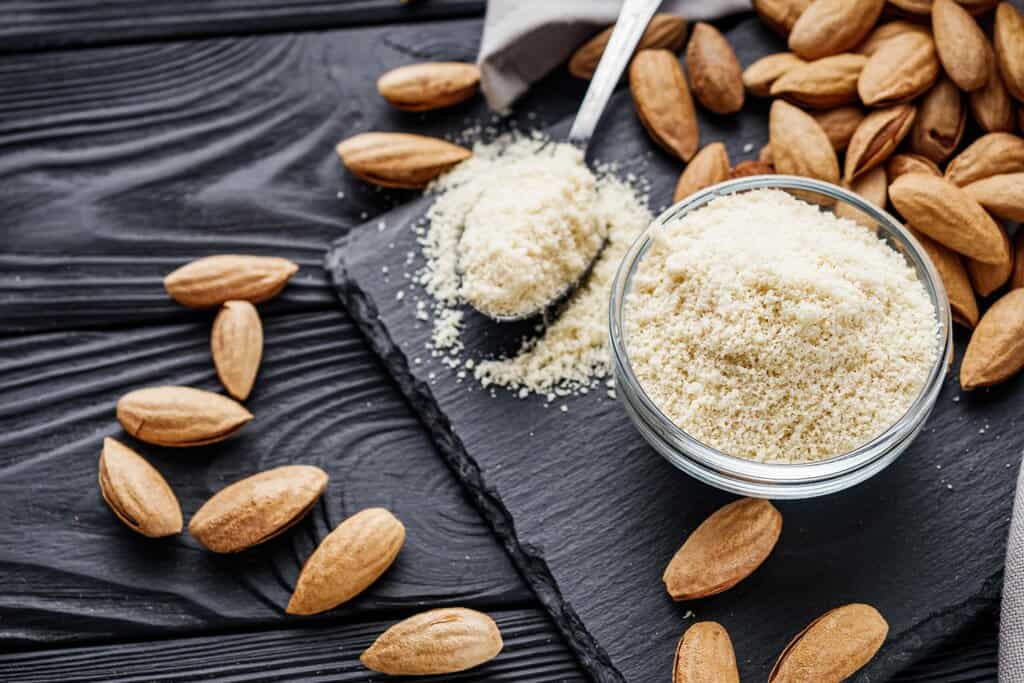 What can I use instead of almond flour? You can replace almond flour with regular flour or almond meal. The best nut-based substitutes for almond flour include cashew, pecan, macadamia, walnut, and hazelnut flour. In addition, the best nut-free substitutes are oat, sunflower seed, flaxseed, pumpkin seed, or cassava flour.

After years of baking and converting recipes, I’ve learned the ropes around the trade of substituting flour varieties with one another, including almond flour.

If you’re part of the gluten-free or keto family, you’re no stranger to using almond flour in many recipes. However, if you’ve run out of this nutty flour, we recommend replacing it with the following ideal substitutes.

If you want to replicate the taste of almond flour rather than the texture, our top recommendation is almond meal.

Both are made using ground almonds, though almond meal and almond flour have two subtle differences setting them apart.

Almond flour is typically made by grinding the blanched almonds with their husks removed into fine flour. In comparison, almond meal still contains husks and offers a coarser grind.

If you have forgiving recipes like cookies, quick bread, granola bars, breaded meats, and casseroles, using almond meal will ensure the same subtle sweet, nutty flavor to your baked goods.

Substitute almond flour for almond meal on a cup-for-cup basis.

Traditional all-purpose flour or wheat flour are suitable almond flour alternatives if your diet allows it. Better yet, regular flour is readily available and costs a fraction of the price.

If the recipe calls for an almond taste, add almond essence or sliced almonds to the all-purpose flour or wheat flour to replicate almond flour’s sweet, nutty flavor.

All-purpose flour and wheat flour is fat-free yet higher in carbs than almond flour. Therefore, they are unsuitable for paleo and keto diets.

Flour is a better binging agent than almond flour. So, use slightly less regular flour, around ¾ cup for every 1 cup almond flour. In addition, use one to two fewer eggs.

Using other nut flour to replace almond flour ensures a similar texture and fat content, allowing you to bake and cook with minimal recipe alterations.

All nut flours are suitable for keto, gluten-free, and low-carb diets. You can replace almond flour with any nut flour using the same volume.

If you can’t find other nut flour at the grocery store, try making the flour own by grinding unflavored nuts in the blender or food processor.

Oat flour offers similar fiber and protein content to almond flour. However, it is slightly lighter than almond flour, lending a light, fluffy texture and subtle nutty flavor to your baked goods.

Oat flour is available in most grocery and health stores. However, you can make it at home by grinding oats in a blender or food processor.

Sunflower seed flour is another gluten-free flour you can use as an almond flour substitute.

This nut-free alternative lends a similar consistency and is also ideal for individuals following a keto or paleo diet.

Heads up: Sunflower seeds contain chlorophyll that can cause some recipes to turn slightly green due to the reaction with a leavening agent like baking powder or baking soda.

We suggest adding a tablespoon of lemon juice or apple cider vinegar to your recipe to counteract the reaction.

You can substitute almond flour with sunflower seed flour on a cup-for-cup basis.

Flaxseeds, also known as linseeds, are popular in vegan and gluten-free recipes. Their nutty taste, texture, and binding properties make them an ideal substitute for almond flour.

You can purchase ground flaxseed flour at the store or grind whole flaxseed seeds in a blender or coffee grinder to form a flour.

Tip: Store flaxseed flour in the refrigerator, as it turns rancid quickly due to its high-fat content.

Substitute almond flour for flaxseed flour with a cup-for-cup exchange.

Pumpkin seed meal is less common than other flour or meal varieties, but it lends a light nutty flavor, making it another suitable almond flour alternative.

Pumpkin seed meal is nut and gluten-free. In addition, its more subtle flavor profile makes it even more versatile than almond flour.

A pumpkin seed meal is made by grinding the seeds into a coarse flour-like texture.

We recommend using the meal as an almond flour substitute for more forgiving recipes like quick bread, cookies, and casseroles due to the coarser texture.

You can simply substitute almond flour for a pumpkin seed meal with a cup-for-cup exchange in your recipes.

Cassava flour – the newfound paleo darling – is made from the cassava plant’s starchy root. This flour is excellent gluten and nut-free substitute for almond flour.

As a result, you can use cassava flour in many recipes without changing the taste. However, perfecting the texture is more challenging than other flour varieties.

When combined with liquids, cassava flour tends to become sticky and gummy.

So, although you can use the general cup-for-cup ratio when in a pinch, you might not end up with the same texture that the recipe originally intended.