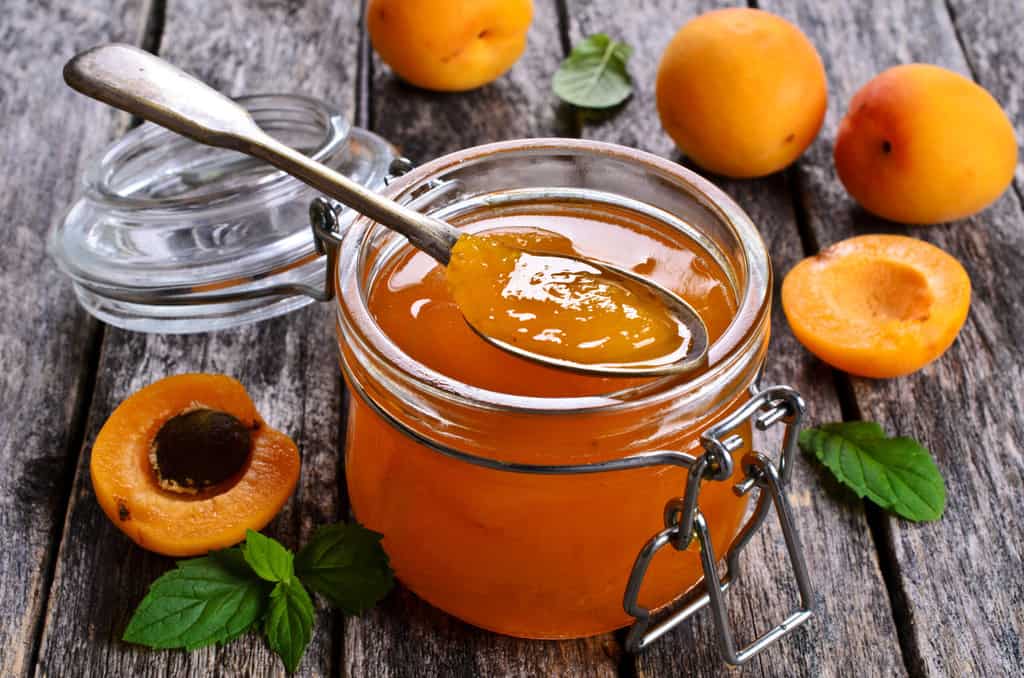 What can I use instead of apricot jam? The best substitutes for apricot jam are tart fruit preserves like marmalade, peach jam, apricot chutney, redcurrant and apple jelly, and ginger jam. Or use canned or dried apricots or duck sauce for zing in a savory dish.

Apricot jam or preserves make a sweet, fruity, and delicious topping for your breakfast toast. It’s used for baking pies, crostatas, and glazing cakes and buns. Its acidic flavor adds zest to savory chicken and pork dishes and goes well with cheese. We recommend these nine substitutes for apricot jam.

An excellent substitute for apricot jam is marmalade.

Marmalade is a  tangy citrus preserve made with oranges, lemons, limes, grapefruit, or a combination of fruits. The most readily available variety in the US is Seville orange marmalade, which has an appealing bitterness.

Traditionally, marmalade is a toast topping, but it is as versatile as apricot jam and adds a similarly sour flavor.

Use marmalade as a substitute for apricot jam in savory dishes, in marinades for lamb, to make chicken wings sweet and sticky, and in a sauce for pork chops.

Marmalade is an apricot jam alternative in baking as it has a similar texture. Replace apricot jam with marmalade in malva pudding.

Use strained marmalade to make a glaze for fruit tarts, to stick marzipan to Christmas cake, and to make Hot Cross buns glossy.

Use marmalade in a 1:1 ratio to replace apricot jam.

Another delicious substitute for apricot jam is the peach jam.

Also made with tender stone fruit, the peach jam is good on bagels, croissants, and over waffles.

Peach jam makes an ideal substitute for apricot jam as it has a similar consistency, color, and flavor profile– although it doesn’t have the hint of tartness that apricot jam has.

Use peach jam instead of apricot jam to make a glaze for pork chops, ham, or BBQ chicken. Serve peach jam or preserves with a cheese board and drizzle it over baked brie.

It also makes lovely jam tarts, a cheesecake topping, a cake filling for Battenberg, and spooned into yogurt.

Use peach jam in equal amounts to apricot jam.

If you don’t have any apricot jam, reach for another preserved apricot – apricot chutney.

Chutney is a savory condiment made by simmering chopped fruit, vinegar, spices, and sugar. Originating in India, chutney has been adapted to suit local tastes and available produce worldwide.

Because it has an underlying sweetness and similar consistency, apricot chutney makes an excellent apricot jam replacement in savory dishes.

Use apricot chutney in the South African curried mince dish, bobotie, casseroles, or marinades for lamb and chicken. Apricot chutney also makes a fantastic glaze for pork and ham roasts and pairs well with cheese.

Replace the apricot jam with the same amount of apricot chutney.

Red currant jelly is a tasty replacement for apricot jam.

Fruit jelly is similar to jam, containing fruit and sugar. However, jellies use fruit juice rather than chopped or whole fruit.

Red currant jelly has the same zestiness as the berry, making it suitable for sweet and savory applications. It’s traditionally served alongside venison, lamb, or turkey, like cranberry sauce.

Red currant jelly makes a gorgeous glaze for roast meat, a pan sauce for steak or chops, or to add zing to a marinade.

Red currant jelly has a more liquid consistency than apricot jam when heated, so take care when using it in baking.

Another fruity replacement for apricot jam is apple jelly.

Like redcurrant jelly, apple jelly is a sweet spread made from juice and sugar, thickened with pectin.

Apple jelly makes an ideal replacement for apricot jam when making glazes. Combine the jelly with spices to make a savory glaze for roast pork. Serve apple jelly with roast meat and cheese.

It also works as a glaze for pastry, especially fruit tarts, because apple jelly has a mild flavor and transparency.

However, apple jelly doesn’t have enough flavor to provide the sweet-sour kick you want in sticky chicken or apricot pudding.

Apple jelly has a smoother, runnier consistency than apricot jam when heated, so take care when making a glaze.

An unusual substitute for apricot jam is the ginger jam.

There are two types of ginger jam, one sweet and one savory. Sweet ginger jam is like marmalade, with pieces of fresh ginger instead of orange, often combined with apple.

Savory ginger jam is similar to chutney or relish and often includes spices and chili.

Both kinds of ginger jam are suitable apricot jam substitutes.

Use sweet ginger jam instead of apricot jam in puddings that could use a hint of spice, like malva pudding or pastries with dried fruit. It adds a delicious touch as a glaze for fruit cake.

Use savory ginger jam for tartness and heat in Asian chicken and pork dishes or as an accompaniment for cheese.

Ginger jam can replace apricot jam in equal quantities so long as you enjoy the spicy warmth it will provide.

Apricots are usually cut in half and preserved in syrup or fruit juice.

You can use drained, canned apricots as you would fresh, such as in a tart or with ice cream. The syrup also makes a tasty sauce when thickened with cornstarch.

Canned apricots are a handy replacement for apricot jam. Drain, crush, and add the apricots to a pork hotpot or chicken curry to add a tangy sweetness. Use them as a dessert topping or in yogurt.

Because canned apricots aren’t as sugary as jam, you will taste the apricot’s natural tartness. They also won’t have the texture and intensity of jam, so you’ll need to use more.

Dried apricots are also a suitable alternative to apricot jam.

Apricots can be dried either in halves or whole. They retain their vivid orange color if treated with sulfur dioxide; otherwise, they will turn dark orange-brown.

Even though they’re dried, these apricots retain their intense flavor and make a handy substitute for apricot jam if you’re making a stew, casserole, or tajine.

They add a delicious sweetness, especially when slow-cooked and softened to melting and work well in apricot chicken.

Because dried apricots have a completely different texture than apricot jam, you can’t make a 1:1 replacement. Add as many dried apricots to a dish as suits your taste.

A surprising alternative to apricot jam is duck sauce.

You’ll probably be familiar with this dipping sauce from Chinese cuisine.

Duck sauce can be made from plums and often contains apricots, peaches, and pineapple. Although it contains sugar, the sauce is seasoned with salt, ginger, and chili and has a vinegary zing. The flavor profile reminds you of the apricot’s tartness.

Use duck sauce to replace apricot jam when you make a basting sauce, marinade, or glaze for meat. It’s not suitable for sweet dishes.

Duck sauce has a more robust flavor than apricot jam, so use it sparingly and taste as you go.