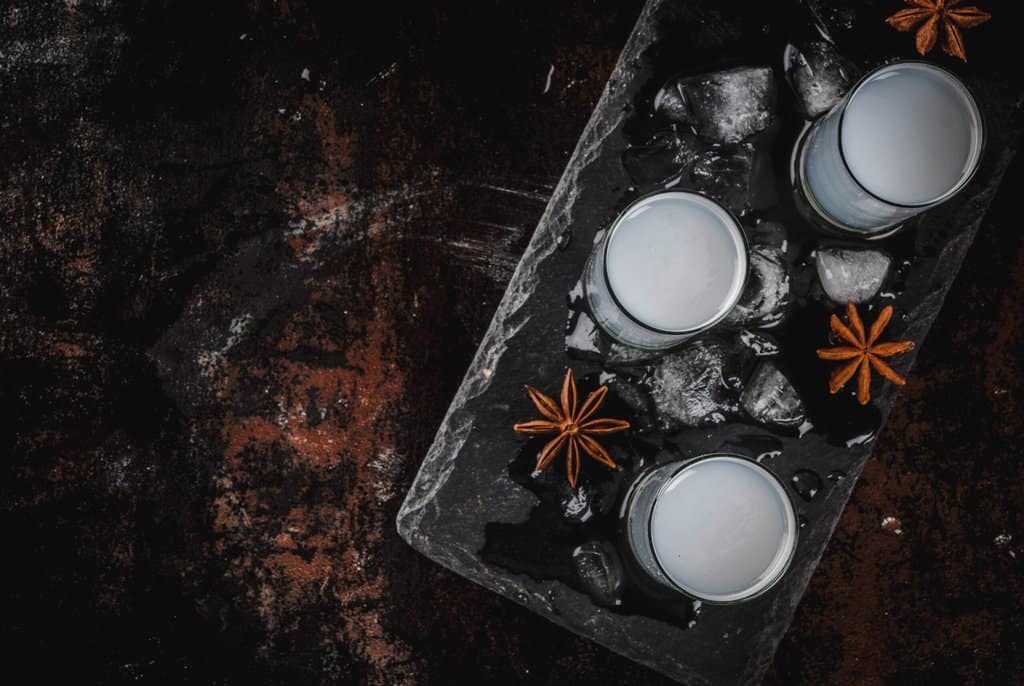 What can I use instead of arak? The best substitutes for arak are other anise-flavored alcoholic beverages, such as raki, ouzo, pastis or Pernod, absinthe, sambuca, anisette, or aguardiente. Non-alcoholic alternatives are alcohol-free pastis and anise-flavored soda syrup.

Arak or araq is a Middle Eastern alcoholic beverage made from grapes distilled with anise for licorice flavor. This potent drink is served as an aperitif with mezze. Arak is usually diluted: the colorless liquid turns milky-white when water is added, giving it the name “milk of lions.”  Use arak in cooking or cocktails. Try these eight substitutes for arak.

The best substitute for arak is raki, an anise-flavored alcohol from Turkey.

Arak and raki have a common heritage, being distilled from the grape remains from wine production and flavored with anise. However, you can make raki from sugar beets, figs, and molasses.

Raki is the ideal substitute for arak as an aperitif, as it is equally high in alcohol, anything from 40 to 100% proof.

Serve raki with water as you would arak, since it has a similar cloudy effect, or replace it in a cocktail in the same proportion.

Substitute equal amounts of raki for arak in seafood dishes and sauces, especially mussels and shrimp, and in marinades for chicken.

Another anise-flavored substitute for arak is ouzo.

Ouzo is unusual because it is controlled by ACO (designation of origin) and must be produced in Greece.

Ouzo gets its distinctive licorice flavor from star anise but can also include other aromatic herbs, like coriander, cardamom, fennel, and mint.

Ouzo produced in southern Greece is often sweetened with sugar – arak and raki traditionally have no sugar.

Ouzo makes a delicious substitute for arak, combining with water to create a translucent effect. This beverage makes an excellent aperitif and digestif.

However, ouzo is a little less potent than arak and has a sweeter, more complex flavor, so it may not please all arak fans.

As a replacement in cooking, ouzo is ideal for shellfish dishes, marinades, vinaigrettes, and sauce for veggies. Use ouzo as a 1:1 substitute for arak.

The French liqueur, pastis, is a helpful substitute for arak.

Pastis, usually sold under the brand names Pernod, Richard, or Henri Bardouin, is a grape-based beverage.

To produce pastis, the alcohol is combined with sugar, anise, and licorice root, giving it a robust herbal flavor.

A popular aperitif in France, pastis makes a perfect substitute for arak as a sipping beverage or cocktail ingredient. It responds to water as arak does and has a hefty alcoholic punch.

You can also use pastis when cooking – it is commonly used in French cuisine. Add a teaspoon of pastis to give savory dishes, including seafood, chicken, and pork, an anise kick. Pastis is excellent in desserts, like a trifle.

Use pastis in equal amounts to arak.

Absinthe is another anise liqueur that serves as an alternative to arak.

Absinthe was popular during the nineteenth century but became notorious after being blamed for several deaths. Absinthe was banned until authorities realized that alcohol poisoning rather than anise or wormwood was responsible. T

Only unbanned in the US in 2007, absinthe retains a dangerous reputation. An approved US version of the beverage is called herbsaint.

Like arak, absinthe makes water milky and is a suitable replacement as an aperitif, or digestif, although it is served with a sugar cube rather than only water. Absinthe is a tasty ingredient in fruity cocktails.

Use a few drops of absinthe to create anise flavor in oysters, snails, and cheese dishes.

Italy’s version of arak is sambuca and is a handy substitute for arak.

Sambuca is made from grain or molasses and contains sugar syrup flavored with oils extracted from star anise, green anise, elderflower, and licorice root.

The European Union regulates the production of sambuca, which must meet various requirements.

Drink sambuca as an alternative to arak, but expect two differences. First, sambuca is much sweeter than arak, and second, it is usually served with coffee beans in the beverage.

Sambuca is a delicious addition to espresso, like Italy’s Caffé Corretto.

Use sambuca when cooking, but your dish may end up sweeter. It’s best to use sambuca in a 1:1 ratio in desserts.

Anisette is a delicious substiute for arak.

This French liqueur is made from grapes and anise seeds. It has a characteristic sweetness and has the least alcohol of all the anise beverages.

Known as anis in Spanish, this drink has an almost syrup-like quality and tastes like black licorice.

Choose anisette as an aperitif or digestif, blended with water if you want a sweeter, lighter anise flavor. It’s delicious added to a cocktail.

Use an equal proportion of anisette when cooking.

A Colombian alternative to arak is aguardiente, translated as “firewater.”

Colombian aguardiente is not to be confused with other South American beverages with the same name.

Made from sugarcane, aguardiente gets its strong licorice flavor from aniseed. Production of this beverage is strictly monitored, although the alcohol level and flavorings do vart – aguardiente made in one part of Colombia cannot be sold in another region.

Aguardiente is most popular in the Andean region of Colombia, where it is drunk neat.

Drink aguardiente instead of arak in equal quantities, but it’s not ideal for cooking.

For a non-alcoholic alternative, Richard produces an alcoholic-free pastis.

This French liqueur replacement tastes and smells like the original version, with a robust anise aroma.

It makes a perfect substitute for arak if you choose not to drink alcohol.

You can also use alcohol-free pastis to add flavor to sauces served with chicken and fish.

If you love anise but want to avoid alcohol, use anise-flavored soda syrup instead of arak.

Made in Italy, anise=flavored soda syrup has the licorice-forward flavor of anise liquors but is lower in calories and contains no alcohol.

Add this syrup to soda, Chai tea, hot chocolate, and coffee, and enjoy as an alternative to arak for a licorice hit. Use it in mocktails and even in cocktails instead of arak.

You can also flavor desserts with anise-flavored syrup.

However, use smaller quantities of syrup than arak as the flavor is relatively concentrated.