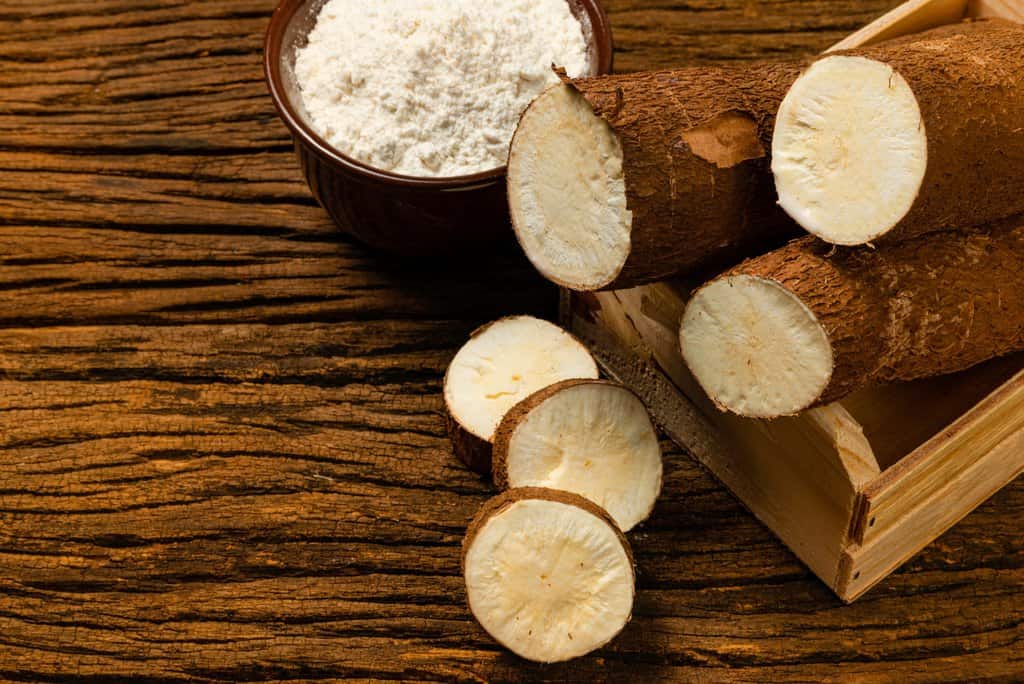 What can I use instead of arrowroot flour? The best substitutes for arrowroot are tapioca starch and cornstarch, which can replace arrowroot as a thickener, binder, and coating for frying. Use flour, potato starch, and rice flour as a thickener and for baking. Other gluten-free thickeners are xanthum gum, gelatin, and agar agar.

Arrowroot flour is a gluten-free starch that comes from a yam-like tuber. Because it is neutral-tasting and colorless, arrowroot flour makes an ideal thickening agent, binder, and coating for fried food. We recommend these eight handy substitutes if you can’t find arrowroot flour.

Tapioca starch or flour, a product of the cassava root, is the perfect gluten-free and vegan substitute for arrowroot.

Like arrowroot, tapioca has a mild flavor, won’t discolor your dish, and can be frozen and reheated successfully. The advantage of tapioca is that it works well when heated and can withstand high temperatures, unlike arrowroot.

Tapioca works well with acidic ingredients, so it is ideal for fruit dishes like tarts and pies, giving them a glossy sheen.

Tapioca also works well as a binder, for example, in meat-free burgers. Replace arrowroot with tapioca flour when coating tofu or fish before frying or as a component in a gluten-free flour mix.

Another practical and convenient vegan substitute for arrowroot flour is cornstarch.

Cornstarch, also called maize starch and cornflour, is a gluten-free white powder made from corn. It is an excellent thickener, has a neutral flavor, and gives food an appealing shine.

To activate cornstarch’s thickening and binding qualities, it needs to be made into a slurry (combined with water to form a paste) and heated.

Unfortunately, you can’t use cornstarch with acidic ingredients, like tomatoes or in frozen goods, as it breaks down.

Replace arrowroot with equal amounts of cornstarch when making clear, stock or soy-based sauces or sweet sauces like custard.

Cornstarch is an excellent coating for tempura. You don’t need to use egg as it sticks well. However, it’s not a good choice for baking.

If you don’t have an issue with gluten or wheat, you can use regular wheat flour as a substitute for arrowroot.

Flour is the traditional ingredient used for thickening sauces, stews, and soups and forms the basis of a roux. However, it doesn’t make for a glossy finish. It’s also ideal for creating a frying batter and for baking.

Substitute two parts of all-purpose flour for one part of arrowroot when using it as a thickener. Use equal amounts when dusting protein for frying.

Another excellent substitute for arrowroot flour is potato starch.

Potato starch is extracted from potatoes and dried to form a neutral-tasting powder. It is not the same as potato flour, which is made from the whole cooked potato and tastes like the vegetable.

Being gluten-free and vegan, potato starch is best used as a thickener but can be used as a coating for fried food and as a component of gluten-free flour.

Use potato starch in a 1:1 ratio for coating food and as a gluten-free flour blend ingredient.

Rice flour is a nutritious replacement for arrowroot flour.

Made from ground white or brown rice, rice flour is gluten and wheat-free, vegan, and high in protein, fiber, starch, and sugar.

Rice flour is common in Asian cuisine and is used as a thickener in sweet and savory dishes.

The challenges with using rice flour are that it creates lumps easily, so you must form a smooth paste before adding it to a sauce. It also absorbs liquid, so you may have to add moisture to your dish.

Also, use rice flour as a component of gluten-free flour mixes. Rice flour can form up to ⅔ flour blend, while arrowroot is limited to ⅓.

Xanthum gum is a helpful substitute for arrowroot powder.

This unusual ingredient is a form of sugar resulting from the fermentation of vegetables or dairy products. The sugar goes through a chemical process resulting in the powder you buy.

Xanthum gum is gluten-free. It is usually vegan, but some manufacturers use dairy as a basis for fermentation.

This product functions as a thickener and binder, whether cold or heated. The advantage of xanthum gum is that it adds body, creaminess, and richness to dishes.

To activate xanthum gum, add water and create a flavorless “gum.” Mix the paste into your dish thoroughly with an electric blender to avoid lumps

Gelatin can also be a substitute for arrowroot flour.

Gelatin is a by-product of the meat industry, made of animal collagen. It is not vegan but is carb and gluten-free, so it is a good choice for those following a keto lifestyle.

Gelatin comes in powder and small sheets and is used to thicken and set food, typically jello, salmon mousse, and fridge tarts.

To use gelatin, dissolve it in water and then add it to the dish. It sets readily when cooled.

As a substitute for arrowroot flour, the gelatin will function as a thickener and binder, especially for desserts and sweet sauces.

Use half as much gelatin as arrowroot flour, and add more if necessary, rather than having your gravy solidify.

A final replacement for arrowroot flour is agar agar.

Agar agar, a vegan version of gelatin, is made from red algae. It is regularly used in Asian cuisine and sweet and savory dishes, especially vegan jello.

You combine the powder or flakes with water like gelatin to activate it.

Agar is a handy thickening agent to replace arrowroot powder. Substitute one part agar agar to four parts arrowroot – it is a very powerful thickener. Like gelatin, a little goes a long way.