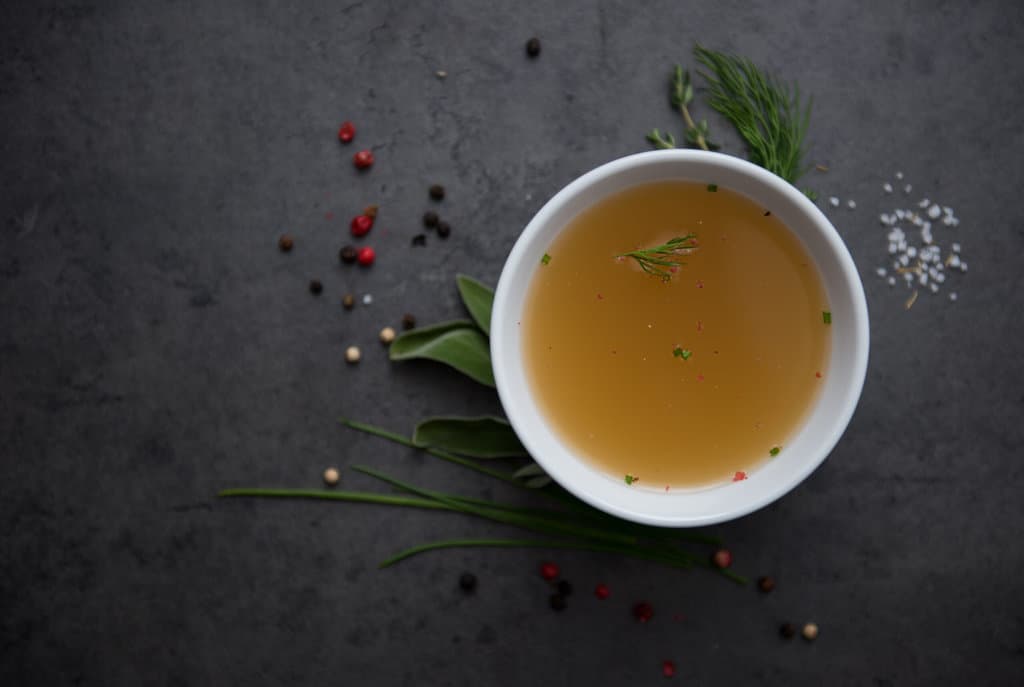 What can I use instead of au jus?  The best substitutes for au jus are beef broth and consommé. Quick alternatives are au jus mix, beef stock powder, bouillon cubes, and brown gravy. Use mushroom consommé, onion soup mix, homemade, plant-based au jus, or miso paste as vegan substitutes.

Au jus (with juice) is a delicious dipping sauce for meaty sandwiches. Make au jus (or jus) by deglazing roast meat pan drippings with broth or wine before straining and serving it. Use au jus as a gravy, dip, or savory base for meat dishes. Here are 10 substitutes for au jus.

The best substitute for au jus is a hearty beef broth.

Beef broth is easy to make but takes time. Simmer meat (without the bones) and vegetables like celery, onions, carrots, and leeks for an hour (or less in a pressure cooker). Strain the liquid and use immediately or freeze.

You can also buy ready-made beef broth at supermarkets in the refrigerated section.

Use beef broth instead of au jus as a tasty dipping sauce, an ingredient for gravy, a soup for noodles or dumplings, or add to cottage pie.

Replace au jus with equal proportions of beef broth, although the latter has a slightly thicker consistency.

Another delicous substitute for au jus is beef consommé.

This light soup is similar to beef broth as you cook down beef and vegetables. However, you then clarify the mixture by adding egg whites that remove the fats and sediments.

Strain the consommé through cheesecloth, and you have a clear, profoundly flavorful liquid.

Beef consommé has a richer flavor than broth but a more delicate texture, making it an excellent au jus alternative.

Enjoy it as a soup, dipping sauce, drizzled over roast beef, or in a pot roast, in identical amounts to au jus.

The quickest and most convenient substitute for homemade au jus is an au jus mix.

This instant gravy consists of a powder that you constitute with water. The mix contains a blend of onion, garlic powder, salt, beef stock, and other seasonings.

Use the ready-mix when you need a savory sandwich dip, pan sauce, or gravy, especially if you haven’t roasted the beef you’re eating.

Add the mix directly to stews, casseroles, and veggie dishes as a seasoning and thickener. The powder also makes a tasty rub for BBQ.

Use rehydrated au jus mix in the same proportions as you would regular au jus.

Beef stock powder, cubes, or granules are a handy substitute for au jus.

Good quality stock powder contains a lot of beef, but others are artificially flavored and full of sodium, so choose carefully.

Beef stock has a meaty flavor that is even more intense than beef broth or consommé.

You can rehydrate stock powder or cubes and use the liquid as an equal replacement for au jus in pan gravy, soup, or slow cooker casserole.

However, if you want to make a dip for sandwiches, add onion and garlic powder, seasonings, fresh herbs, and cornstarch to your stock to have a more complex flavor.

Like stock powder, bouillon cubes are a delicious substitute for au jus.

While beef stock cubes have a basic, meaty flavor profile, bouillon cubes are like dehydrated consommé – they have a richer taste. Keep some in your pantry to add beefiness to other dishes.

Take care to use a high-quality bouillon containing beef extract, celery seeds, potato starch, parsley, and vegetables rather than an overwhelming saltiness.

Crumble a dry bouillon cube into pasta sauce or a casserole for a punch of umami flavor.

Reconstituted bouillon cubes are an ideal replacement for au jus as a dipping sauce, or add the liquid in the same proportions to a goulash, casserole, or ragout.

A ready-mix brown gravy is a convenient alternative to au jus.

Homemade au jus and gravy both begin with meat drippings, but gravy contains thickener and vegetables, so it is more substantial in flavor and texture.

A brown gravy mix allows you to create an instant gravy, thick and hearty, which you can pour generously over meat, potatoes, rice, and veggies.

Gravy mix makes a tasty au jus replacement if you need a pouring or dipping sauce. However, it doesn’t work as a basis for other dishes, as it is too thick.

Vegans and vegetarians who want a savory replacement for au jus can turn to mushroom consommée.

Making mushroom consommé is relatively speedy, as you simmer shitake or portobello mushrooms for an hour. Strain the stock, which will have a concentrated umami kick.

Use mushroom consommé as the base for a pan sauce, to enrich a soup or stew, as a light appetizer, or as a sandwich dip.

You can use mushroom consommé in a 1:1 ratio with au jus. However, the mushroom flavor will come through powerfully, so it may not be to everyone’s taste.

An easy vegetarian alternative to au jus is an onion soup mix.

Onion soup mix is based on dehydrated onion flakes and powder, dried herbs (celery seed, parsley, etc.), seasonings (salt, pepper, and paprika), and thickeners. If you are vegan or vegetarian, read through the listed ingredients, as some brands contain beef extract.

This au just alternative has a caramelized flavor profile that makes it a zesty ingredient when added dry to a casserole or stew.

For an addition to a dipping sauce or soup base, reconstitute the soup with a quarter to half the required water – otherwise, you will end up with onion soup.

Onion soup is a tasty savory replacement for au jus, but you will need to use less of it because of the robust onion flavor that can overwhelm a dish.

A homemade plant-based sauce is an ideal vegan or vegetarian substitute for au jus.

Unlike au jus, which is based on beef drippings, a vegan version starts with sautéed onions and garlic.

Vegan au jus is an appetizing sauce that you can use as gravy, for dipping, or to drizzle over roast veggies. Use it in equal quantities to beef au jus.

A final alternative to au jus is miso paste.

Miso paste is a Japanese seasoning that consists of fermented soybeans. The original umami flavor, miso has a deeply savory rather than beany flavor.

Although miso is widely used in Asian cuisine, you can use it to enhance other flavors, giving your dish depth and richness.

Miso paste works as an au jus replacement if you need a base for a soup, stew, or pot roast.

You can add a tablespoon of the paste directly to the pot or dilute it in a cup of water as a liquid. However, it won’t dissolve, so add it immediately.

Miso tastes stronger than au jus, so add it little by little and adjust the amount as necessary.