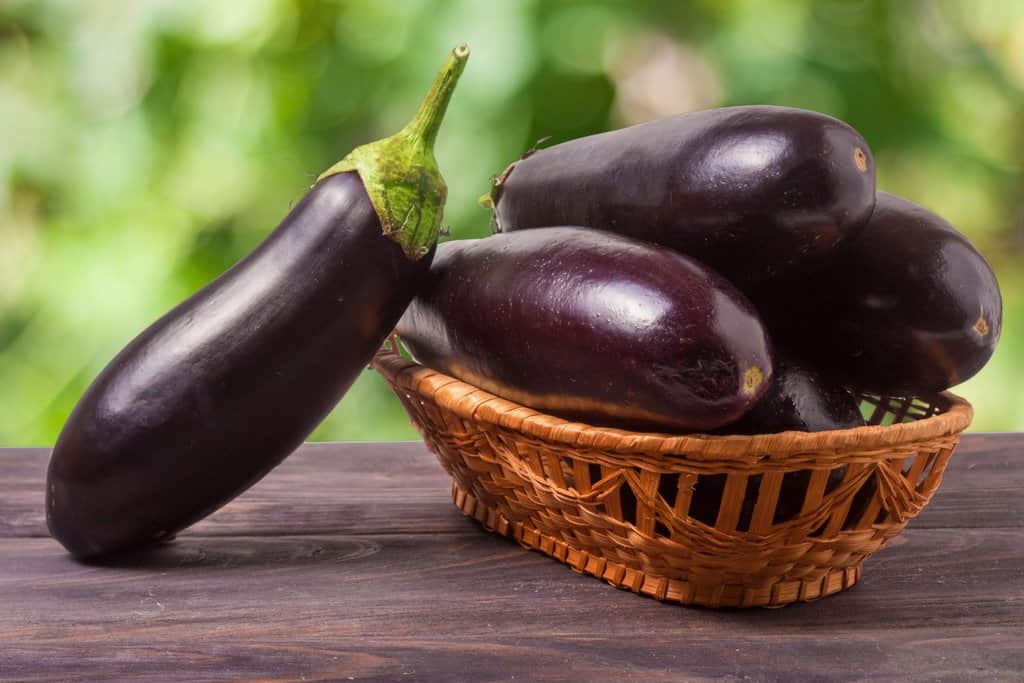 What can I use instead of aubergine? The best substitutes for aubergine include portobello or shiitake mushrooms. Okra works well for slow-cooked dishes, while zucchini is ideal for ratatouille or lasagne. Then, green tomatoes lend an umami flavor, and root veggies are best for stews and soups.

Aubergine is an extra-friendly veggie that lends itself to almost any dish, including casseroles, lasagnas, stir-fries, and more. When raw, it boasts a sweet, mild flavor with a slight bitterness and a firm, spongy texture that transforms into meltingly tender vegetables.

If you aren’t fond of this multitasking vegetable, try one of these seven alternatives.

You can use portobello mushrooms in dishes like pasta, moussaka, eggplant pizzas, and eggplant parmesan. You can also grill, sauté, or broil them instead of aubergine.

Portobellos are also a go-to protein source for vegetarians or vegans. Each mushroom contains over 2 grams of plant-based protein.

The primary limitation of portobello mushrooms as an eggplant substitute is their size. As a result, they won’t be suitable for recipes that call for long aubergine slices used for layering.

Shiitake mushrooms are a close second to portobello mushrooms as an ideal aubergine substitute.

Shiitake mushrooms are an Asian variety with a distinctive umbrella shape and dark color. In addition, shiitakes are prized for their rich, savory, and umami taste and myriad health benefits.

They are jam-packed with vitamin B, vitamin D, and copper and are similarly high in fiber to aubergine. In addition, various compounds in shiitake mushrooms can help fight cancer, support heart health, and boost immunity.

Shiitake mushrooms offer a mild, exotic umami flavor that matches eggplant flavors. They are mostly sold dried, which you can soak overnight before use.

You can use shiitake mushrooms as an eggplant substitute in eggplant pizza, pasta, stir-fry, and parmesan eggplant.

Like aubergine, okra is one of those foods you either love or hate. However, okra’s soft texture, mild taste, and ability to blend with surrounding ingredients and flavors make it an excellent alternative to eggplant.

Okra, also known as Lady’s fingers, boasts a long, slender, and tubular shape. This Ethiopian food requires minimal preparation and can be fried, sautéed, grilled, pan-roasted, or added to stews and casseroles.

Okra is prone to become slimy and silky when cooked. However, you can avoid the slimy texture by soaking the okra in vinegar for an hour and patting it dry to remove the stickiness.

Alternatively, cook the okra at high temperatures, like grilling or sautéing, to prevent it from turning slimy.

Zucchini, or courgette, is a summer squash variety with a similar mild flavor to aubergine. The true beauty of both veggies is their mild flavor profiles that allow the rich flavors of surrounding foods to shine.

Zucchini’s cook time significantly impacts the texture – if you cook it too long, it can turn soft and soggy, much like eggplant’s texture. However, zucchini does not hold its shape as well as aubergine.

You can substitute aubergine with zucchini in ratatouille, pasta, stews, stir-fries, soups, and even baba ghanoush. However, ensure to double the portion size when using zucchini instead of eggplant.

If your bumper crop of veggies boasts large zucchinis overnight, use them as a replacement in a recipe that calls for aubergine.

While some aubergine recipes call for salting to remove excess moisture, it isn’t necessary with zucchini unless it’s exceptionally moist.

In that case, place the zucchini in a sieve and sprinkle it with salt. Then, allow it to drain over the sink for about an hour before patting it dry and proceed.

Green tomatoes are your best alternative if you’re specifically after the mild but lasting umami taste of aubergines.

Green tomatoes are firmer and denser than their ripe counterparts, allowing you to cook them in ways that aren’t suitable for softer, ripe tomatoes.

You can also substitute aubergine with green tomato in casseroles.

It’s vital to cook the root vegetables for an extended period to ensure their texture softens sufficiently.

You can always use other aubergine varieties if you’re looking for a close replacement for the standard purple globe aubergine. Different cultivars to consider include:

The various aubergine varieties lend subtle flavor and texture differences, which you may find more appealing than the standard variety. However, you can use them interchangeably while cooking.