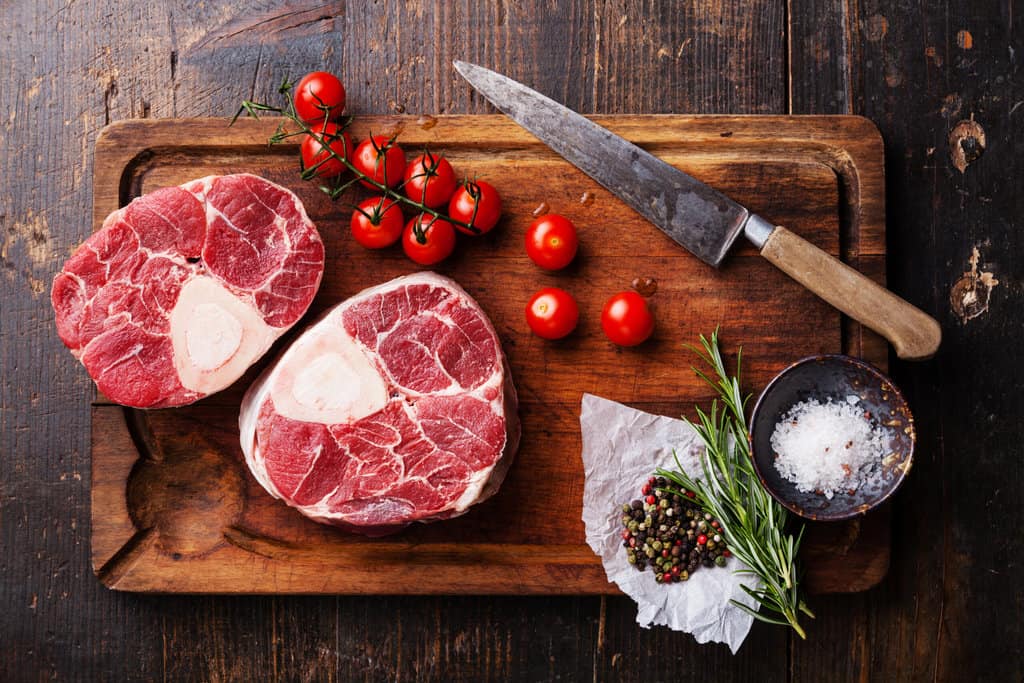 What can I use instead of beef shank? The best substitutes for beef shank are other beef cuts needing long, slow cooking: arm roast, short rib, oxtail, chuck roast, bottom round roast, and skirt. Lamb shanks and neck are tasty alternatives, while mushrooms are ideal for vegans.

Beef shank or shin comes from the legs of the cow, making it thick and sinewy but inexpensive. The large marrow bones, tough texture, and leanness limit beef shank to low, slow cooking. The nine best substitutes are when the well-cooked beef shank is tender, robustly flavored, and unctuous.

The best substitute for beef shank is beef arm roast. This cut comes from the shoulder and foreleg, between the neck and the chuck. It contains a round bone and lean meat. The beef arm is also called arm chuck and clod and is cheaper than the more common chuck roast.

Because the arm roast comes from the animal’s leg, which is muscular and well-exercised,  the meat can be fibrous and chewy.

Arm roast can substitute for beef shank as it has a similarly savory, rich flavor and develops a tender, juicy texture when pot roasted. Also, use arm roast when making a hearty, veggie-laden stew in the slow cooker.

Another excellent alternative to beef shank is a short rib.

A short rib is a cut from the lower ribcage of the cow, known as the plate. The “short” designation comes from the cut’s shape: a short portion of rib bone surrounded by meat, including some connective tissue.

This cut is ideally slow-cooked so that the tough connective tissue breaks up and the meat becomes tender and flavorful.

The short rib is cooked with the bone, like a beef shank, until the meat is succulent and falls off the bone. It’s delicious when braised, stewed or barbequed, making a delectable alternative to the shank in Osso Bucco.

Short rib contains more bone than the shank, so you will need to buy more to feed the same number of people.

Literally cattle tails, oxtail comes from a male or female animal – the name is historical. Oxtail was regarded as food for the poor, which is why ox meat was distinguished from beef.

As eating habits return from nose to tail, using each part of the animal, the oxtail has become more desirable and pricier.

This cut is sold in pieces sized from large to small as the tail narrows.

Oxtail makes a hearty substitute for the beef shank, as it contains marrow bones, requiring extended cooking. The meat is sweet and silky.

Use oxtail to make a meaty soup, like Mexican Caldo de Res. It’s tasty, braised in the oven or crockpot, and is best cooked the day before eating it.

Buy more oxtail than you would beef shank as it contains relatively little meat compared to bone.

Chuck roast makes a handy replacement for the beef shank.

Also called a blade roast, a chuck roast is taken from an area between the animal’s neck and shoulder and is available bone-in and boneless.

Chuck roast is relatively inexpensive because it is fatty and contains connective tissue, so it needs low, slow cooking methods. This cut is popular for pot roasts.

Substitute chuck roast for beef shank in Beef Bourgoinon, where the meat is gently cooked with red wine and mushrooms. It also makes a good substitute in a slow-cooked curry.

Use equal amounts of chuck roast as a beef shank. However, chuck is fattier than the beef shank, so your dish will become more unctuous.

An outside or bottom round roast is a lean cut that you can substitute for the beef shank.

Also called silverside, this meat is cut from the animal’s hindquarters above the shank. Being part of the leg, the bottom round roast can be stringy if not cooked well because it is lean and boneless.

This cut makes an affordable Sunday roast but will dry out if overcooked.

Typically sold as stewing meat, bottom round roast can substitute for beef shank in stews, stroganoff, chili, or Beef Provençal.

Skirt steak makes a tasty alternative to the beef shank.

The skirt comes from the plate or diaphragm section below the cow’s ribs and has a prominent, fibrous grain. It’s fattier than the adjacent flank steak, although leaner than chuck.

The trickiest aspect of preparing a skirt is cutting it: you must slice it against the grain, or it will be tough. This cut also turns out dry if you overcook it – cook it hot and quick (e.g., for fajitas) if you don’t want to slow cook it.

Replace beef shank with skirt steak if you want a stew or pulled beef made in the crockpot.

If you’re happy to enjoy lamb rather than beef, lamb shanks make the perfect substitute.

Like beef shank, lamb shank is cut from the leg, contains plenty of connective tissue, and can be stringy.

However, lamb shank becomes sweet and succulent when braised or slow-cooked in a crock pot.

Lamb shanks are a flavorful replacement for the beef shank, particularly in Osso Bucco. Use lamb shank to make BBQ pulled meat or curry.

Use the same quantity of lamb as beef. Note that lamb has a distinctive flavor and aroma, putting some people off.

Another practical cut of lamb that can replace beef shank is lamb neck.

Lamb’s neck contains collagen-rich bones, connective tissue, and well-marbled meat, making it an excellent candidate for braising in wine and shredding for ragù or shepherd’s pie.

Use lamb neck as a beef shank substitute in hearty stews and curries.

This cut contains plenty of bone, so you’ll need to buy more to get the same amount of meat as on a beef shank.

If you’re cooking for vegetarians or vegans, use meaty portobello mushrooms as a substitute for beef shanks.

Portobello mushrooms have large flat caps and open gills. With their robust texture and intense flavor, they stand up to cooking in a stew or casserole.

Use these tasty mushrooms to make a chunky vegan stew with plenty of vegetables and rich broth.

The advantage of this substitute is that mushrooms take less time to cook than beef shanks, so dinner will be ready sooner.

Replace beef shanks with as many mushrooms as you’d like.