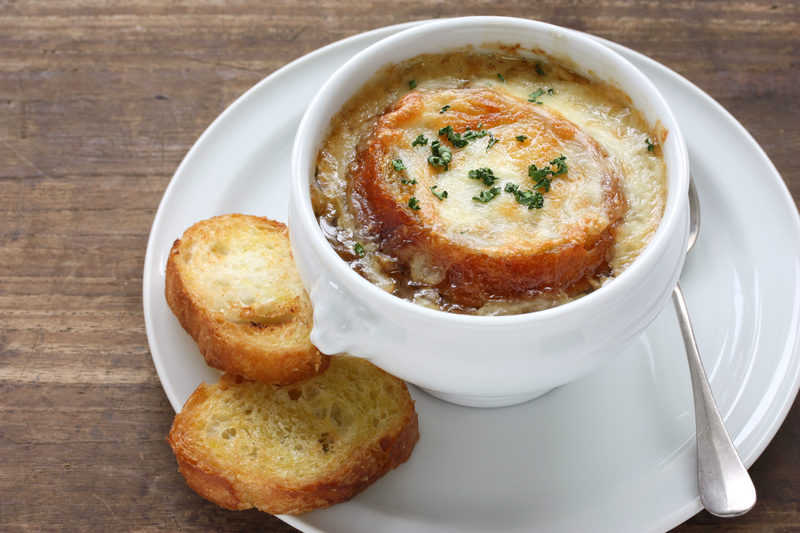 What are the best side dishes with French onion soup? Some of the best sides have a crunch or starch factor like French dip sandwiches, paninis, crackers and cheese, baked potatoes, and buttered noodles.

Other great sides range between bitter-tasting foods such as green salad, roasted brussels sprouts, stuffed mushrooms, and sweet like fruit salad and dark chocolate mousse. The best sides to pair with this salty and rich soup are the soup’s opposite flavors: starchy, bitter, and sweet.

A French dip sandwich is a great hardy side dish that you can dunk into your broth. With slices of roast beef and Swiss cheese, it matches perfectly with the beef broth and melted gruyere cheese.

If you want an easier bite and soak in your sandwich, regular French bread is a good selection. However, we recommend a baguette because it will hold its shape and crunch better and it still goes with the French theme.

To cook and heat the thinly sliced roast beef through, prepare a packet of au jus in a small saucepan. Once the au jus is finished, put the roast beef in the dip, a few slices at a time.

Once the meat is mostly no longer pink, take the beef out and put it on your open baguette or French bread.

Top the meat with Swiss cheese and caramelized onions and close your sandwich.

A ham, gruyere and apple panini is another great sandwich to pair with French onion soup. The apple lowers the salty taste of the beef broth with its natural sweetness while the panini bread is strong enough to hold its ingredients while dunking in the soup.

First, peel and cut granny smith apples (the sourness will be a good contrast to the caramelized onions) into ¼ inch slices. Cook the apples in a medium-sized skillet until they are slightly soft and let them cool for a few minutes.

Take a couple slices of white bread and spread some mustard on each slice.

Assemble your sandwich by putting the gruyere cheese on first, then the ham, and then the cooked apple slices. Top it with the other bread slice, mustard-side down.

Soda and Ritz crackers are often paired with soup recipes, but we recommend Cornish or Mazo. They are round, flavorless crackers that can take any kind of cheese and hold its structure when submerged in liquid.

Gruyere, the cheese commonly melted on top of French onion soup, has a salty, creamy and nutty flavor. The older the cheese, the stronger the taste.

If you wish to match the gruyere flavor with your crackers, it is often compared to swiss cheese. Another cheese comparable to gruyere is gouda; it ages like gruyere, but has a milder taste. If you want cheese with more zing, cheddar or parmesan are good choices.

Buttered noodles may have a light, subtle taste, but they can absorb the broth (with the caramelized onions) and take in all the soup’s flavors. If you wish to not put your noodles in the broth, a bit of butter and salt will work as well.

To prepare some buttered noodles, boil some salted water in a medium or large pot until it’s rolling, for about 10 minutes (depending on the amount of water).

Pour the pasta (either egg noodles, penne, fusilli, or bowtie) into the water and stir it occasionally, letting it cook until al dente, about 10 minutes. Al dente means the noodles are cooked but still firm. Overcooked noodles will make them mushy and harder to pick up.

Drain the pasta in a colander, put them back in the pot, and put in a tablespoon of butter. Mix it well and season it with salt and pepper.

A baked potato is a healthy and easy carb to have with your soup if you wish to change it from the regular bread slices. It is more diverse with its topping options from butter and sour cream to shredded cheddar cheese and bacon.

Before washing your potato, preheat the oven to 425 degrees F.

Take your potato (preferably russet) and rinse it well under lukewarm water while scrubbing it. Pat the potato dry with a cloth or paper towel.

Puncture the potato with a fork numerous times.

If you want crusty potato skin, rub the potato in olive oil and season it with salt and pepper. If not, leave it as it is.

Line your baking sheet with aluminum foil, put the potato on the sheet, and bake it for 1 hour, flipping it halfway.

Once baked, cut the potato open and top it with toppings of your choice.

A green salad is a refreshing palette cleanser with its clean, fresh ingredients. It is another side that is easy to prepare as well as to optimize depending on your mood or food preferences.

The base for every salad is the lettuce or green leaves, and for French onion soup, the best base to combat the sweet onions are arugula and spinach. Arugula has a strong bitter taste while spinach is milder, but mixing them together will balance the two out.

To spruce up the salad, add some ingredients for brightness like sliced tomatoes and cucumber. For extra protein and a nice creamy touch, toss in some sliced hard-boiled eggs.

If you wish to have some dressing on top, you can either stick to the French theme and choose the French dressing or a simple vinaigrette.

Roasted Brussels sprouts have a great earthy taste without getting too bitter, making it a great addition to your French onion soup. What makes these sprouts especially delicious are the random leaves because they get especially crispy and salty.

Preheat the oven to 400 degrees F.

Cut the ends off and slice them in half.

Depending on how much you have, for every pound of brussel sprouts, pour in 2 tablespoons of olive oil. Toss the sprouts until they are evenly coated.

Put ½ tsp salt in, toss the sprouts, add another ½ tsp salt and toss it one more time.

Pour the sprouts on a baking sheet, arranging them cut side down.

Bake them until they are dark brown on the cut side, about 30 minutes.

Stuffed mushrooms are a popular side dish that are as cheesy as your French onion soup.

Preheat the oven to 400 degrees F.

Remove the mushroom stems from the caps and chop them very fine. Set them aside.

Brush the mushroom caps with a dry lint-free towel. Running them under water will make them slippery and not clean them well. Put the mushrooms caps on a baking sheet.

In a medium skillet, cook the stems with minced garlic until the moisture is gone. After it is cooled, stir in the cream cheese, parmesan, and salt and pepper. If you wish to have something more than cheese and garlic, add other spices like thyme or cayenne pepper for heat.

Stuff the mushroom caps with the filling and sprinkle more parmesan on top.

A fruit salad is an easy, simple but freshening side dish and will brighten your palette after some bites of the French onion soup. Add some sour cream to cut the sweetness back or some cream cheese for a nuttier flavor.

Grapes have a good combination of sweet and sour, but make sure to get snap grapes because they are seedless and have a hint of strawberry flavor.

Apples are a popular fruit paired with different cheeses, but a personal favorite is the delicious red. They are sweet, crunchy, and don’t brown quickly.

For a softer texture and milder flavor, add bananas.

If you wish to add a citrus for more punch in your salad, oranges are great with sour cream or cream cheese.

To add more nuttiness to your fruit salad, chop up some walnuts or pecans. They are mild in flavor and are usually put in sweet dishes.

Dark chocolate mousse is a light, airy and sweet dish that can give your tastebuds a break from the salty and savory soup. The mixture of dark chocolate and heavy cream is rich enough to complement the French onion soup, but has a subtle bitterness to keep it from being too sweet.

In a double boiler or large bowl over a pot of simmering water, melt chopped bittersweet chocolate. Set it aside.

Beat cold heavy cream and egg whites in two separate bowls until they reach soft peaks. Slowly add sugar to the egg whites while continuing to beat them until firm peaks.

Carefully fold the egg whites into the chocolate. When there are only a few streaks of egg whites left, fold in the whipped cream until fully incorporated.

Refrigerate the mousse for 1 hour or until it is set. Top it with whipped cream, fruit or chocolate shavings.

Since French onion soup has caramelized onions and beef broth, an unsweet or dry wine selection would work best.

For the red wine selection, our top choices would be the pinot noir, merlot, and viognier.

Pinot noir is a popular red wine when it comes to beef dishes or stews. It also goes well with vegetables like mushrooms and onions.

Merlot can be paired with both light and heavy dishes, so no matter which side dish you choose, the merlot will match with them well. It also goes with the various soup ingredients like beef, cheese, and garlic.

Viognier is often paired with soft and hard cheeses, has a light fruity flavor with a soft aroma of nutmeg, and is put in some French onion soup recipes. You can use it and drink it as well.

While red wine is more fitting for French onion soup, if you prefer white wine, here are your best options: pinot blanc, pinot grigio, and chablis.

Pinot blanc is a white wine that is served with light dishes and mild cheeses. It has a hint of a smokey flavor, matching the rustic style of the French onion soup.

Pinot grigio is a good choice because it is a neutral wine, making it one of the most versatile of the white wine selection. When it comes to cheese pairing, gruyere is the best cheese to go with pinot grigio.

Chablis, also known as French chardonnay, also has a tart flavor of citrus and pear. It is also known as a cheese wine, specifically for soft, creamy and delicate cheeses.