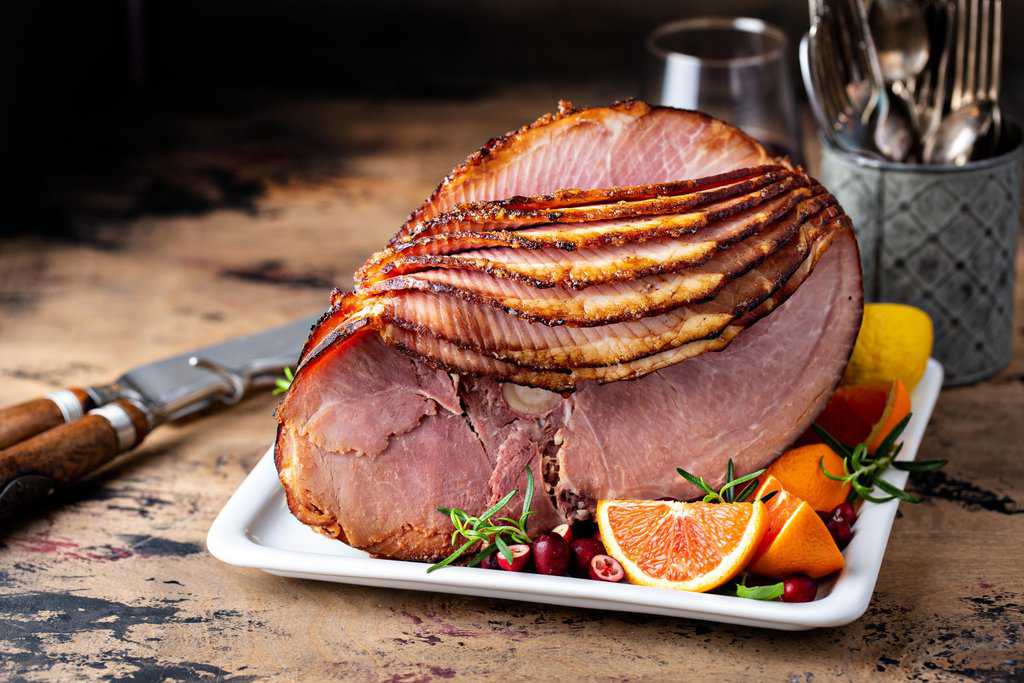 What are the best sides for honey-baked ham? A sweet baked ham needs a hearty starch like smashed potatoes or spoonbread on the side. Comforting cooked veg is also delicious, such as bean puree or zucchini boats. Add zest to the ham with spicy apricots, or serve fresh spring salads, like barley and asparagus, bean and onion, or bitter leaves and apple.

Honey-baked ham is a festive dish, whether it’s for an Easter brunch, a family reunion, or best friends for dinner. We’ve rounded up the most delicious sides to complement your juicy ham.

Mash is an excellent side for ham, but you won’t regret trying the smashed potato trend.

Keep the skin on some potatoes for extra texture, then bake them next to the ham. Here’s how to smash potatoes.

Boil a pound of potatoes in a large saucepan with enough salted water to cover. Cook them until very tender.

Drain the boiled potatoes and return them to the pan over low heat. Shake the pan to dry the potatoes.

While smashing, blend in ½ cup of milk, a tablespoon of butter, and ½ cup of basil pesto. Season to taste.

Finally, place the potatoes in a greased baking dish and crisp them in the oven just before serving.

Combining the best of cornbread and corn casserole, this bright yellow spoonbread is wholesome and luscious, echoing the sweetness of the honey ham – and can bake next to it.

Make the batter in your food processor to save chopping and mixing time. Here’s how:

Melt ⅓ cup of butter over low heat. Set aside to cool.

Next, add two cups of yellow cornmeal and two teaspoons of baking powder. Blitz until the mixture is thick.

Gently pour in the melted butter, ½ cup of milk, and ½ cup of cream, blending continually.

Pour the batter into the baking dish and bake for an hour until the spoonbread is set.

Let the spoonbread stand for 10 minutes before serving.

Another mash alternative is this luscious puree of lima beans, thick with cream and lightly seasoned with thyme.

You can use fresh lima or broad beans, but a package of frozen beans will work fine.

Bring a cup of vegetable or chicken stock to a boil. Add the beans, reduce the heat, and simmer the beans for about 15 minutes until they are very tender.

Now, carefully transfer the beans to a blender or processor and blitz them with two tablespoons of cream, a tablespoon of butter, and a teaspoon of finely chopped fresh thyme.

When the puree is smooth, season it with salt and pepper.

Make your oven do double duty: bake zucchini boats while the ham glazes. Stuffing zucchini may seem like a serious effort, but it only takes 10 minutes.

Plan one zucchini per person. This recipe is for six people:

Begin by slicing the zucchini in half, scooping out, and chopping the insides. Don’t break the shells – they are your boats.

Next, melt two generous tablespoons of butter in a frying pan. Add ½ finely chopped onion, ½ chopped bell pepper, a cup of sliced mushrooms, and the zucchini. Fry until the veggies are soft.

Put the cooked veggies in a bowl. Add a cup of panko breadcrumbs and ½ cup of finely grated Parmesan cheese. Mix and season with fresh oregano, basil, salt, and pepper.

Carefully stuff the zucchini, sprinkling them with additional cheese.

Bake for 20 minutes until tender and cheesy.

This unusual side pairs canned apricots, cinnamon, cloves, and citrus to create a spicy, tangy dish that contrasts with the ham. Make a batch of this relish-like side for your next family lunch. This is how to do it.

Drain a large can of apricot halves, reserving a cup of syrup.

Use a piece of muslin, cheesecloth, or a spice infuser, to enclose eight whole cloves, one cinnamon stick, and eight allspice berries.

Make a spicy syrup by putting the spices, the apricot syrup, ¼ cup of white vinegar, two tablespoons of sugar, and a piece of orange rind into a saucepan. Bring the mixture to a boil.

Next, add the apricots and simmer for five minutes.

Allow the apricots to cool to room temperature before serving. Remember to remove the spice bag.

These apricots get better after a couple of days and last for a week in the fridge.

Barley, an ancient grain, is highly nutritious and makes a lovely salad that you can serve warm or at room temperature.

This version includes asparagus, a vegetable that heralds spring, making it an ideal vegetarian dish for Easter brunch.

The first step is to get a cup of pearl barley into boiling, salted water. Barley takes about 40 minutes until its tender.

Next, add a cup of sliced mushrooms and cook until they soften or about three minutes.

When the barley is tender, add a cup of sliced green asparagus, and cook for four minutes. Drain if necessary.

Stir through the mushroom mixture. Season the salad to taste.

Red is a gorgeous, festive color, and this salad will brighten up any buffet or dinner table. This simple yet hearty salad makes a lovely textural contrast to tender ham. Let’s look at how to make it.

Drain and rinse two cans of kidney beans in a colander. Place the beans in a salad bowl.

Next, finely dice one small red onion. Put the onion in a separate bowl and pour over four teaspoons of red wine vinegar. Leave the onions to marinate for 15 to 60 minutes.

Meanwhile, halve a cup of cherry or baby plum tomatoes and add them to the beans.

When ready, tip the onions into the salad and drizzle with two tablespoons of olive oil. Mix thoroughly.

A fresh, tart salad cuts through the rich, sweet ham and contains apples, a traditional accompaniment to pork. The dressing is what makes this easy salad shine.

Start by mixing the dressing in a small bowl. Combine ¼ cup of apple cider vinegar, ¼ cup of sour cream, ¼ cup of buttermilk, three tablespoons of honey, one teaspoon of crushed garlic, one finely chopped scallion, and a pinch of red pepper.

Whisk and then season to taste.

Slowly add ½ cup of olive oil to the dressing, pouring in a steady stream and whisking constantly.

For the salad itself, chop a cup of arugula, a small head of radicchio, and two heads of chicory.

Combine the greens with the dressing.

Slice two tart apples and scatter them over with tablespoons of roast pecans to top the salad.

Serve immediately so that the apple does not brown.

A honey-baked ham often forms the centerpiece of a celebratory meal, so you can’t go wrong with sparkling wine.

A bubbly, fruity Rosé wine is ideal, especially with berry notes to complement the ham’s sweetness. Or try an effervescent red for contrast.

The smoky, salty pork flavor with its sweet honey glaze gives you a wide range of white wine pairings.

Fruit-forward wines with plenty of acidity and a touch of sweetness are perfect: look at a bright Gewürtztraminer, a crisply elegant Riesling, or a spicy Chardonnay.

Another option is a smooth Pinot Grigio or Zinfandel with a honey undertone.

If you like to pair your sweet ham with a sweeter wine, pick Moscato, Brachetto d’Aqui, or Vin Santo.

Red wine is not ideal with ham, but a refreshing South African Pinotage or Shiraz will work.

Cranberry jelly is the traditional sauce for honey-baked ham, whether you use canned or fresh. Mustard is another excellent ham condiment.

This sauce combines cranberries and mustard in a delicious, almost instant sauce.

Combine ⅔ cup of wholegrain mustard and ⅔ cup of cranberry or redcurrant jelly in a small pot. Whisk the sauce over low heat until blended. You can also use this mixture as a glaze for ham.

Apple sauce is often served with pork and is easy to make at home as a side or to pour over the ham.

Once soft, puree the apples, adding ½ cup of sugar and two teaspoons of lemon juice.