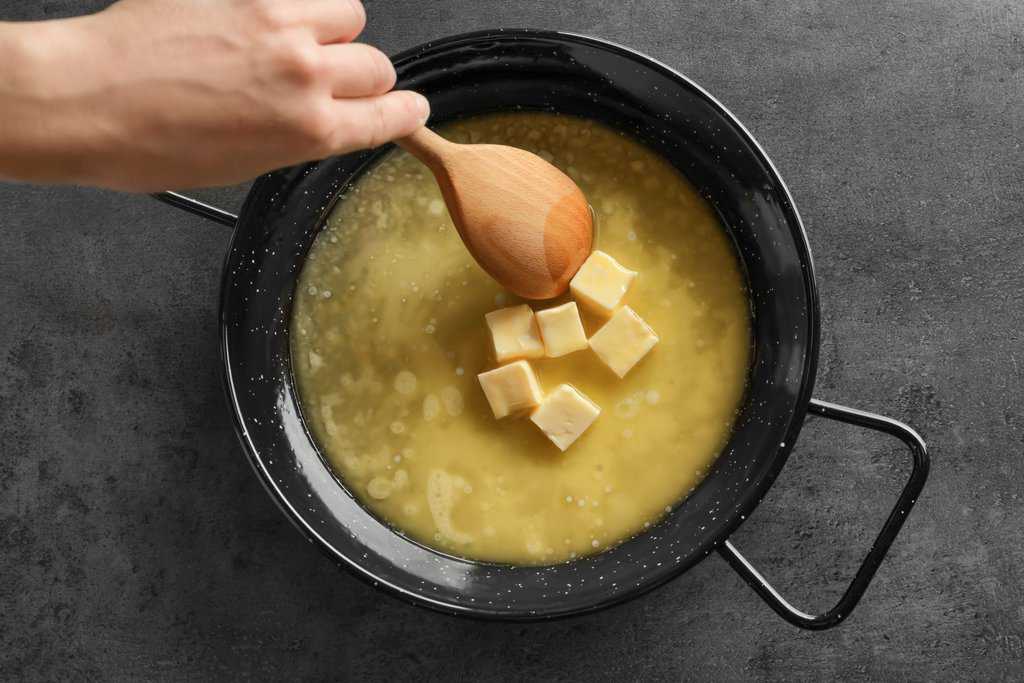 What can I use instead of melted butter? The best substitute for melted butter is ghee for flavor and texture. Plant-based oils like coconut, olive, and canola are excellent substitutes, as are margarine, shortening, and vegan butter. When baking, use prune butter, nut butter, or apple sauce as melted butter substitutes.

Whether you’re out of butter, adopting a vegan lifestyle, or avoiding butter because of lactose intolerance or milk allergy, several substitutes are available. Here are the top 10 butter substitutes we recommend.

The ideal substitute for melted butter is ghee or clarified butter.

Traditionally used in Indian cooking, ghee is a rich oil made by simmering butter until the water in it evaporates.

Although ghee is a dairy-based fat, it is an excellent butter alternative for people with lactose intolerance as it contains no lactose or casein.

Ghee has a delicious nutty flavor and a creamy consistency because it is composed entirely of fat and thus is high-calorie.

Substitute melted butter with equal amounts of ghee, whether for lemon butter dip, garlic bread, baked goods, roasting, pan-frying, or sautéeing. You can also use ghee to make sauces with minimal loss of buttery flavor.

Another handy substitute for melted butter is coconut oil.

Coconut oil derives from coconut milk and flesh and is available in refined and unrefined or “virgin” forms – the latter tastes more like tropical fruit.

Fans of this healthy oil enthuse about its many benefits: coconut oil boosts the metabolism, suppresses the appetite, and invigorates hair and skin.

Like butter, coconut oil is solid when cold and at room temperature and shares butter’s creamy texture. These qualities make coconut oil a perfect substitute for melted butter.

Replace melted butter with equal amounts of melted coconut oil in baked goods like muffins, quick bread, or pancakes – use unrefined oil if you like a sweet, nutty flavor.

Olive oil is a practical and delicious substitute for melted butter.

Extra virgin olive oil (EVOO) is the luxury olive oil, coming from the first olive pressing and unadulterated by any chemical additives or processes. EVOO is a pricy, high-end oil with fruity flavors and beautiful green colors.

Use EVOO as a 1:1 substitute for melted butter when drizzling over cooked vegetables, with a grinding of sea salt. The flavor is different but equally rich.

For frying, sautéeing, or roasting vegetables, eggs, meat, or fish, use equal amounts of regular olive oil as a melted butter substitute.

Use olive oil in savory, spicy, or chocolatey bakes as it has a strong flavor. Olive oil contains more fat than butter, so for every four tablespoons of melted butter, use three tablespoons of olive oil.

Canola or rapeseed oil is a handy neutral oil to substitute for melted butter.

This oil was created in the 1970s by scientists at the University of Manitoba in Canada.

Other advantages of canola oil are that it is vegan, contains no dairy, and is far cheaper than butter.

As a substitute for melted butter, canola oil works in batters for muffins, quick bread, and pancakes, as it has a mild, unobtrusive flavor.

Canola oil is also ideal for replacing melted butter as cooking oil – use it in equal amounts for frying, searing, and roasting.

Another plant-based substitute for butter is margarine.

Margarine is hydrogenated vegetable oil and was originally developed as a heart-healthy butter alternative.

Margarine contains at least 80% fat, making it solid at room temperature, like butter.

If you are vegan or lactose intolerant, be sure to check the margarine’s ingredients carefully – some margarine producers include milk to increase the fat content. However, vegan margarine is a good option as a butter substitute.

Melted stick margarine can replace butter in equal amounts in cookies, cakes, doughnuts, muffins, or cupcakes. However, your bakes will not have the same rich flavor as butter yields.

Use margarine instead of butter for cooking, as it has a relatively high smoke point. Melted margarine can be used for garlic bread or even as a base for white sauce.

Vegetable shortening, known by brand names like Crisco and I Can’t Believe It’s Not butter, is a non-dairy fat that can replace melted butter.

Shortening is a popular butter substitute for baking, as it has a similar consistency, high melting point, and neutral flavor.

Your baked goods will turn out more tender, lighter, and airier than those with butter because butter contains water while shortening is pure fat.

However, shortening will never give you a rich buttery flavor, so don’t use it for drizzling, garlic or herb butter, or frosting.

Also, use shortening as cooking oil, especially for frying.

Another substitute for melted butter is vegan butter.

Many varieties of vegan butter also contain salt, natural and artificial colorants, flavorings, and emulsifiers to mimic the taste and texture of butter.

Vegan butter is intended as a substitute for butter and can be used in a 1:1 ratio for all baking and cooking purposes.

However, like margarine and shortening, the flavor and texture of the baked goods will not be identical to ones made with butter.

Homemade prune butter is an innovative substitute for melted butter.

To make prune butter, blitz ½ cup of pitted prunes and ¼ cup of hot water in a blender or processor.

Cashew, macadamia, and almond butter are delicious alternatives to peanut butter. Although commercial products include sugar and other natural and artificial additives, high-quality nut butter is the pure nut.

With its high monosaturated fat content, nut butter is heart-healthy, high in protein, and contains less fat than dairy butter.

Because nut butter is only 50% fat compared to butter’s 80% fat, you need to combine nut butter with another fat, such as vegetable oil, to achieve the appropriate texture.

When baking sweet bakes like muffins or quick bread, substitute apple sauce for melted butter. The sweet tartness of the apple will show through slightly but will not be very noticeable.

Because of the difference in texture, substitute half a cup of apple sauce for every cup of butter.