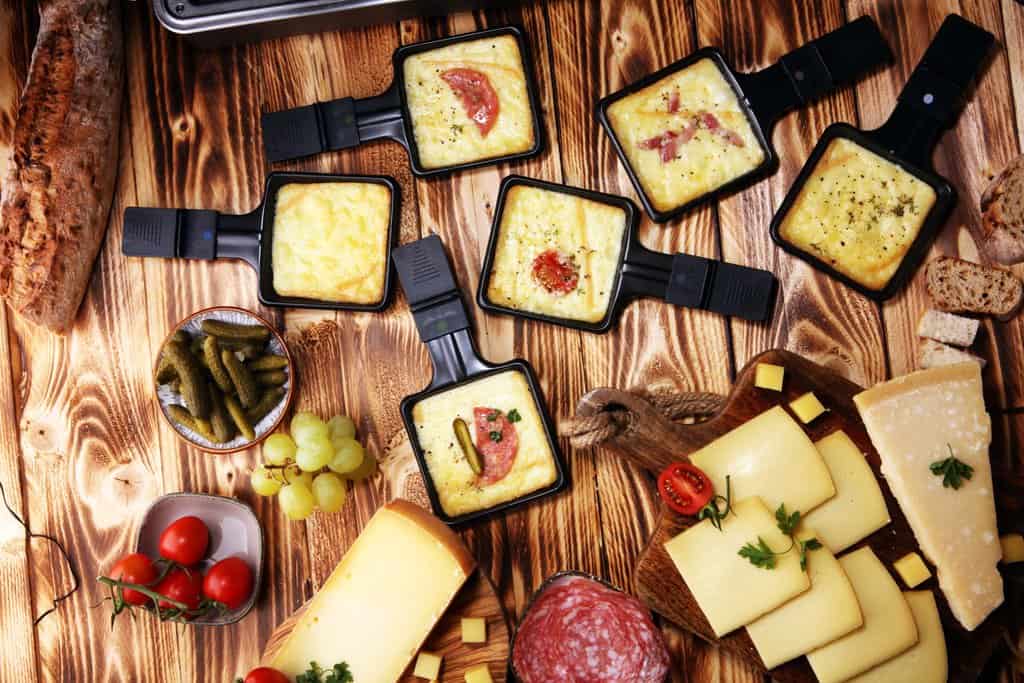 What are the best side sides for Raclette? Raclette, based on the French word ‘racler’, meaning ‘to scrape’, is a salty, slightly sweet and nutty cheese that you melt and scrape over food. For a good contrast flavor, the most fitting sides are ones with acidic tones like pickled cucumber, pickled onions, certain fruits like pineapple, and sorbet. Other great sides include salty foods like cured and cooked meats, as well as milder but textured sides like boiled potatoes, bread, corn on the cob and grilled asparagus. When it comes to raclette, acidity and salty are great for a strong palette, but it complements milder flavors as well.

Pickled cucumber, also known as gherkins or ‘cornichons’ in French, has a sharpness and crunch that contrasts well with the mellow and melty raclette.

Cut the cucumbers in slices or in spears.

Mix water, white vinegar, salt and pepper, and red pepper flakes until the salt dissolves in the liquid, about 1 minute.

Put the cucumbers in a jar, making sure they are snug and have extra space on top.

Put dill and garlic on top of the cucumbers, then pour in the liquid. Cover and refrigerate it for 1-3 hours.

If you wish to add extra ingredients for a more pungent bite, add seasonings in the liquid like mustard seed, coriander seed, peppercorn, and chopped jalapeno peppers for extra heat.

Pickled onions have the same crunch and tang as pickled cucumber, but they have a slight sweetness to cut back on the sharpness. It will match well with the subtle, mellow cheese.

The best onion to use is red onion because they are the sweetest and are best eaten raw. Thinly slice the red onion.

Put the sliced onions in a mason jar and place it in the sink.

Combine water, white and apple cider vinegar (or white vinegar if unavailable), a tablespoon or two of honey or syrup, and salt in a small saucepan. Set it on medium heat and bring it to a simmer.

Carefully pour the hot liquid into the jar. Press the onions down with a knife or long spoon. Let the jar sit for 30 minutes.

Fruit gives a nice break from the smooth, nutty raclette with its brightness and tartness.

The best kind of fruit that balances the raclette’s flavors are ones with extra sourness. Pineapple has the highest acidity, and the sweetness is subtle enough that it will not overpower the cheese.

Grapes are highly sharp as well, and they are usually mixed with cheese as an afternoon snack. They also have a good snap for different texture.

For times when you do not want sugary fruit, tomatoes are more subtle and are more commonly paired with different cheeses.

If you do not like or cannot stomach tart fruit, there are lighter and more pleasant options like dates. Pitted dates have the taste and texture of chewy caramel. Their slight nuttiness will bring out the raclette’s nuttiness and give a thicker chew than other fruit.

Sorbet is a great palette cleanser after the salty cheese. It is like regular fruit with its tartness and fruity taste, but it has the extra advantage with its coolness, giving your tastebuds a break from the heat.

We advise to make pineapple sorbet because, like said previously, it is highly acidic. However, it can be easily substituted with other fruit like raspberry or blueberry to keep the tartness.

Put 8 oz frozen fruit (cubed or whole, depending on the fruit’s size) in a food processor or blender.

Pulse the fruit into small pieces and add a few tablespoons of maple syrup or sugar syrup (a mixture of sugar and water simmered for 20 minutes), one tablespoon at a time. If you want less sugar, add orange juice.

Keep pulsing the fruit until it is smooth and paste-like. Either serve it immediately or store it in the freezer for later.

Cured meats are the perfect side for extra salt to go with the mild raclette. They need little prep work, and most do not need cooking.

Salami is mixed with herbs and seasonings like garlic and vinegar. If you want meat that has more than sodium, salami is a good choice.

Ham comes from a pork leg and is cured wet or dry. While ham has other seasonings like salami, ham uses sugar. Ham would be great if you want less salt.

Pancetta and bacon come from pork belly, but bacon is smoked and needs cooking, while pancetta is salt-dried and can be eaten cooked or uncooked. Choose pancetta for the saltiness or choose bacon for the smokiness.

Prosciutto is a very thin and uncooked meat with a buttery texture that goes well with the raclette’s creaminess. It is a lovely complement to the cheese because of its similar palette.

Cooked meats go with many dishes for its protein, savory bite, and enhances certain spices. For the raclette, it brings out the salt and nut flavoring.

Since cured meat is mostly made from pork, pork is the first choice. It is firm so it is easier to pick up and naturally seasoned, so it will help keep the sodium levels even.

For a less salty and more savory option, grilled steak will do the trick. The grill marks add smokiness and its tenderness will melt with the cheese.

Since raclette is similar to Swiss, it is a good cheese to have with chicken or turkey. Both have subtlety and will not fight with the cheese’s slightly stronger tones.

Seafood and cheese usually do not pair together, but if you wish to have seafood, we recommend either lobster or shrimp because of their lightness and richness that can accompany the cheese.

Bread and butter may be a classic, but bread and cheese is better because you can scrape the cheese over some pieces, raclette has a more complex palette than butter, and the combination of carbs and dairy can keep you fuller longer.

The baguette is the best for raclette because it is soft on the inside but toasty on the outside, has a neutral flavor for more flexibility, and will stay straight with the added weight of added toppings.

Ciabatta is wetter than the baguette, but it still has a thick enough crust to hold its shape. It also has a savory but aromatic bite, pairing well with the cheese.

If you wish for a multi-purpose bread, sourdough is an acceptable choice. It has a thick crust, can come in thick slices, and its slight sharpness will come out with the raclette.

Squirt lemon juice over it for extra tartness.

Boiled potatoes is the most used side dish when it comes to raclette. It mixes well with the cheese, it is filling to eat and soft in the mouth along with the gooey raclette. What is a better combination than cheese and potatoes?

You should use Yukon gold, fingerling, or russet potatoes. Yukon gold is the best for boiling, fingerling is small and has thin skin so no need for peeling, and russet has a thick skin but multiple uses.

Wash the potatoes, getting rid of any dirt and debris. Depending on if you like potato skin or not, peel the potatoes.

Cut the potatoes into 2-inch chunks.

Add them into a large pot and cover them with water. Make sure the water is above the potatoes by 1 inch. Add some salt and bring them to a boil.

Boil the potatoes until a fork easily pokes through the potato.

Corn on the Cob

Corn on the cob is another simple side dish but has a mild but crunchy quality that accompanies raclette well.

To prepare the corn, shuck the corn and remove the silks. The best kind of corn to use is sweet corn because it will match raclette’s subtle seasoning. Run it under water to wash away the random silks stuck between the kernels.

Fill a large pot with water. Bring the water to a boil.

You can put the corn in right away, but we recommend putting butter and milk in with the water. The corn will absorb the two ingredients, which will make your corn creamier and richer.

Remove corn from the liquid and push in corn holders.

Grilled asparagus adds some sophistication as well as a mix of smokey and bitter taste to the mild raclette. It also adds a slight crunch to give the meal a more complex chomp.

Prepare the grill by preheating it on high heat and scrub off food particles against the grates.

Trim the asparagus by cutting the pale ends, about 2 inches. If you leave the pale ends attached, they will turn tough and woody after cooking.

Put the asparagus in a bowl or a zip-locked bag. Pour in 1-2 tablespoons olive oil and toss the asparagus. Season them with salt and pepper.

Grill the asparagus for 2-3 minutes, turning them occasionally. You will want your asparagus to be tender, but still have a light snap.

The best wine to go with raclette would be selections with high acidity or tannins, which are dry white wines like riesling, chardonnay, sauvignon blanc, and pinot gris.

Riesling may be sweet, but the acidity balances it out. This wine is better with strong and salty cheeses like gorgonzola and parmesan, but it still can go with mild cheeses like muenster, Swiss, and mozzarella.

Chardonnay is a classic white wine that has fruit like apple, lemon and pineapple, perfect fruity tones to go with the raclette. This wine naturally goes with mild, semi-soft cheeses.

Sauvignon blanc has a mixture of different tones from zesty lime to light peach. Be sure to pick the zesty lime because of its sharpness.

If you prefer red wine, go for the selections with high acidity like sangiovese, pinot noir, schnaps, and cabernet sauvignon.

Sangiovese is a light red wine with tones ranging from rustic to fruity (cherry, plum and red currant). It also has small notes of tomato with smokey and earthy undertones.

Pinot noir is a popular red wine with brightness from the cherry and raspberry. For more earthy tones like mushroom and baking spice, get one that was aged in French oak.

Schnaps has a cleansing quality to its wine. This wine helps digest fats, so after a serving of raclette, you can have a glass of schnaps to help digest it since cheese is high in fat.

Cabernet sauvignon is darker in flavor, and not just because of the blackberry and black cherry. It includes tones of green bell pepper, tobacco, wood and vanilla, giving it a spicy but rich taste.