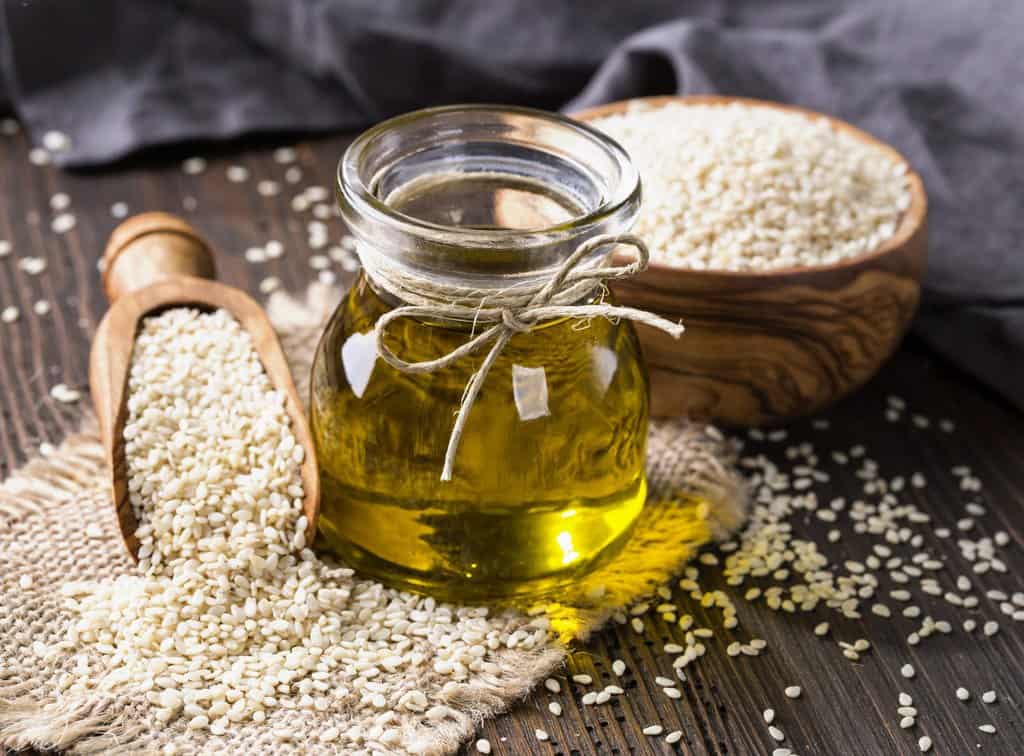 Sesame seed oil has a unique umami flavor and high smoke point, making it popular in Asian cuisine. There isn’t a substitute that tastes quite the same, but there are many oils to reach for instead of sesame oil.

The best alternative to sesame oil is peanut oil.

Peanut oil can be made from raw or roasted peanuts. Roasted peanut oil has a characteristically bold, sweet, and nutty taste that infuses the entire dish.

Like sesame oil, refined peanut oil is valued because of its high smoke point, making it ideal for high-temperature cooking, especially the stir-fries typical to Thai and Chinese cuisine. The peanut flavor is less noticeable in refined peanut oil.

Unrefined peanut oil is unsuitable for cooking but adds a gentle peanut flavor to dressings and marinades.

Use peanut oil in the exact quantities as you would sesame oil.

Avocado oil is another excellent substitute for sesame oil as it has the highest smoke point of all plant oils.

Avocado oil comes from the fruit rather than the pit of the avocado, so it has a luscious butteriness and mild flavor that lets the food’s flavor shine.

Like the fruit, avocado oil contains healthy fats and has anti-inflammatory properties.

Use avocado oil instead of sesame oil for searing, sautéing, stir-frying, pan-frying, baking, roasting, and grilling or broiling.

Olive oil is an all-around great substitute for sesame oil because it is versatile, delicious, and healthy.

To earn the label “extra virgin,” olive oil must be untouched by chemicals or heat during pressing.

Refined olive oil comes from later pressings and may be processed using chemicals or heat. However, regular olive oils still have a delicate, herbaceous flavor.

EVOO isn’t a good choice for cooking because of its low smoke point. Instead, use it as a substitute for cold-pressed sesame oil in dressings, dips, marinades, and as a finishing oil.

For cooking, replace sesame oil with equal quantities of regular olive oil, which can tolerate higher temperatures. The flavor is different but equally delicious.

Another alternative to sesame oil is grapeseed oil, a mild, greenish oil that is a by-product of the wine-making industry.

Grapeseed oil is better known as an ingredient in beauty and health products because of its high vitamin A and C levels. However, grapeseed oil is also made in food-grade quality as an inexpensive alternative to olive oil.

The advantage of grapeseed oil over olive oil is its very high smoke point. This makes it suitable as a substitute for sesame oil in stir-frying, searing, sautéing, pan-frying, roasting, and grilling.

You won’t get the same flavor punch as sesame oil, so you may want to add toasted sesame seeds to the dish.

Grapeseed oil is tasty as a milder replacement for cold-pressed sesame oil in dressings and marinades.

Use in a 1:1 ratio for replacing sesame oil.

Canola oil is a good substitute for sesame oil for cooking purposes.

Canola oil is a highly refined and processed rapeseed oil developed by Canadian researchers in the 1970s at the University of Manitoba. The term “canola” is a combination of “Canada” and “oil.”

This multipurpose oil has a very mild, unobtrusive flavor that lacks sesame oil’s unique earthiness. This characteristic makes it a popular kitchen staple but not the ideal sesame oil substitute.

However, as canola oil has a high smoke point, it can be used to replace sesame oil for all cooking methods: searing, stir-frying, sautéing, grilling, pan-frying, deep-frying, and roasting.

Use equal amounts of canola oil as you would sesame oil.

Another practical substitute for sesame oil that you may have in your pantry is sunflower seed oil.

Like most seed oils, sunflower seed oil is high in vitamin E, which is good for heart health.

Sunflower seed oil has a neutral, bland flavor, making it useful for dishes with both mellow and robust flavors.

As a substitute for sesame oil, this kitchen standby is best used as a cooking oil substitute – it has a high smoke point and is excellent for frying and searing. However, you’ll miss out on the sesame flavor.

This delicious and unusual oil is a beautiful green color and has a sweet, nutty flavor. It packs a nutritional punch, with high levels of vitamins A, K, and E and healthy fats.

However, pumpkin seed oil has a very low smoke point, so it can’t replace sesame seed oil in cooked dishes.

If you want a fresh yet earthy flavor in a salad dressing, dip, or marinade, substitute pumpkin seed oil in equal amounts to cold-pressed sesame oil.

Walnut oil is a brilliant substitute for cold-pressed sesame oil, with its rich, luxurious flavor.

Use walnut oil for a sweet, earthy note in salad dressings and as a finishing oil in similar quantities to cold-pressed sesame oil.

Do not cook with unrefined walnut oil as it becomes bitter and unpleasant.

Hemp seed oil or hemp oil is best known for its medicinal properties, such as reducing cholesterol or improving acne. However, food-grade hemp oil is very nourishing, with a strong grassy, earthy flavor.

You cannot cook with hemp seed oil as it will lose its nutrients at high temperatures. Instead, use it instead of sesame oil in vinaigrettes, toppings, and dips, or drizzle as a finishing oil.

Use hemp seed oil sparingly as it has a potent flavor that can overwhelm other flavors.

Flaxseed or linseed oil can be a sesame oil substitute for adventurous palates.

Long regarded as a health supplement rather than a pantry item, flaxseed oil is perfect for digestive and heart health.

Many people shy away from the oil’s robust, bitter flavor that can be overpowering.

However, once you acquire the taste for flaxseed oil, you’ll enjoy the seriously punchy flavor in a dressing or finishing oil.

Due to its low smoke point, flaxseed oil is not suitable for cooking.

Use flaxseed oil in minute quantities because of its robust flavor.

If a meal needs umami flavor rather than specifically sesame flavor, reach for this luxurious oil flavored with truffles.

Truffle oil is not made from crushed truffles but only flavored with them.

Truffles are a sought-after mushroom-like fungus with a unique flavor, described as garlicky, woody, and complex. They are costly and highly prized in European cuisine, so the oil is a luxury item.

Cheap truffle oil is synthetically made and flavored and should be avoided.

Genuine truffle oil has a characteristically rich aroma and flavor, making it perfect as a finishing oil, especially on risotto, egg dishes, and vegetables.

Use sparingly as truffle oil is powerful.

You cannot cook with truffle oil.