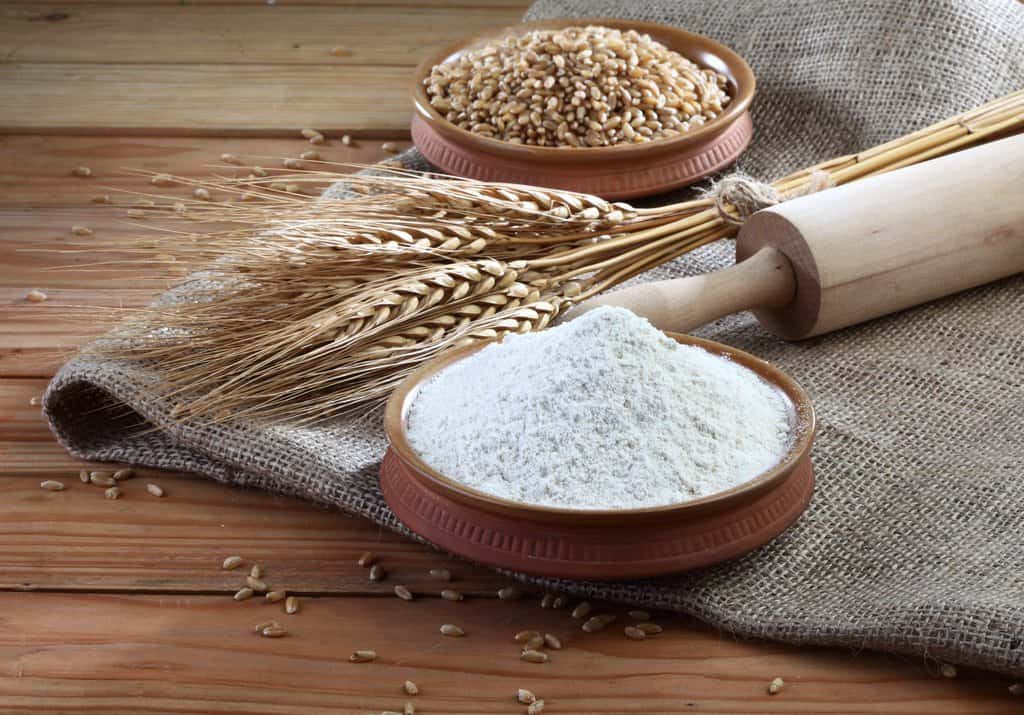 Through gluten protein, wheat flour provides structure and texture to baked goods. It makes dough elastic, keeps your bakes together, and determines how moist or crumbly a bake is. If you have a gluten or wheat allergy or intolerance, you need to use a gluten-free alternative. Here are the 10 best substitutes for wheat flour in baking.

A source of complete protein, quinoa is a nutritional powerhouse, and quinoa flour is a fantastic substitute for wheat flour.

Made from toasted quinoa, the flour contains all the protein, fiber, iron, and magnesium of the original grain and its nutty, slightly bitter flavor.

Quinoa flour is high in protein, making it possible to structure, bind, and add moisture to bakes. These characteristics make it the only gluten-free flour that you can use to replace wheat flour directly.

Use quinoa flour 1:1 instead of wheat flour in baked desserts, cookies, muffins, cakes, and quick bread. However, it won’t work in yeasted bread, which requires proofing.

Sorghum flour is like wheat flour in texture, therefore an ideal gluten-free replacement.

You can substitute wheat flour with sorghum flour directly, but it can impart a sour flavor to bakes, so most people tend to use it as part of a gluten-free blend.

Use sorghum flour to make up 30 to 50% of a gluten-free flour blend to make pancakes, crepes, cookies, muffins, and bread.

A practical gluten-free substitute for wheat flour is buckwheat flour.

Buckwheat is an ancient relative of the rhubarb plant and is a seed rather than a grain. Despite its name, buckwheat has no wheat in it.

High in protein and fiber, buckwheat helps to provide structure to bakes.

Use buckwheat flour as a substitute for wheat flour in pancakes, waffles, and dense, hearty cookies and muffins.

For bread or cake, use buckwheat to make up 30-50% of a gluten-free flour blend.

Oat flour is another excellent high-protein flour that can replace wheat flour for those avoiding gluten.

Gluten-free, organically produced oats are high in protein, fiber and iron, and manganese.

The flour has a mild, nutty, wholesome flavor and a chewy texture that becomes creamy when combined with other ingredients, just like oatmeal porridge.

Replace one cup of wheat flour with 1⅓ cups of oat flour in pancakes, dense muffins, and quick bread.

Use 20% oat flour in a gluten-free flour mix for scones, bread, cakes, cookies, and pastry, especially where you would use whole wheat flour.

Made from an ancient grain, millet flour is a nutritious, gluten-free alternative to wheat flour.

The texture of millet flour is fine and smooth, but it does tend to clump. The flavor is mild, but some people experience slightly bitter, herbaceous undertones, making it best for bakes with intense flavors, like chocolate.

It’s best to combine millet with other gluten-free flour, making up 25 to 50% of the mix.

People with thyroid issues should avoid millet flour as it can aggravate hyperthyroidism.

An ancient African grain, teff is an exciting substitute for wheat flour.

Its naturally gluten-free and rich in protein, fiber, calcium, iron, magnesium, and vitamins B and C.

With its gelatinous texture and mild flavor, teff flour is best known as an ingredient in injera, the flatbread and staple food in Ethiopia.

You can use teff flour to replace wheat flour directly in pancakes and cookies, but it is best used with other gluten-free flour.

Use teff flour to make up 25% of a gluten-free flour blend for banana bread, cookies, and pastry for pies and tarts.

Maize or corn flour is a fantastic substitute for wheat flour if you’re looking for a gluten-free, wheat-free alternative.

Corn flour is distinct from cornstarch (confusingly called cornflour in the UK), a fine, chalky white powder made only from the starchy endosperm of the corn kernel. Cornstarch is a thickener, not a flour.

Corn flour has a fine, smooth texture, neutral flavor and can be white or blue, depending on the corn used.

Although corn flour contains protein to help flavor and structure your bakes, you cannot use it to replace wheat flour directly. Corn flour works best in combination with other gluten-free flours, forming up to 20% of the mixture.

Another corn-based alternative to wheat flour is cornmeal, also known as polenta.

Cornmeal is also made from milled corn kernels, but it has been milled to a different degree than the finer corn flour. Regular cornmeal is coarsely ground with a gritty texture.

Masa harina is a unique, finely ground Mexican cornmeal soaked in limewater to remove the hulls and improve flavor and stickiness. This cornmeal is used for tortillas and empanadas.

Cornmeal is the main ingredient in cornbread, often used without wheat flour.

You can replace corn flour with cornmeal in recipes to create a more textured bake, especially for muffins.

However, you can’t replace wheat flour with cornmeal directly, only as a part of a gluten-free flour mix. Add cornmeal to a blend if you want a gritty texture and corn flavor.

Rice flour or powder is a practical gluten-free, wheat-free substitute for wheat flour.

White rice flour, which comes from polished, refined rice, is mild and neutral in flavor. Brown rice flour, like the brown rice from which it is milled, contains the rice germ and bran, making it more nutritious and fiber-rich, with a toasted, nutty flavor.

Rice flour contains protein, meaning it can provide structure and some elasticity in bakes, preventing them from being crumbly and dry.

When making tempura, pancakes, or sauce, use rice flour as a direct substitute for wheat flour.

However, you can’t replace wheat flour 1:1 with rice flour. Use 50% rice flour in a gluten-free flour mix to substitute for wheat flour.

Because gluten-free flour lacks the binding quality of gluten, any mixture of alternative flours will need a binder to replace wheat flour.

Xanthum gum is a polysaccharide, a chemical compound made of many smaller sugar units. This edible gum is a thickener and emulsifier in products from toothpaste to cosmetics.

Gluten-free bakers include a up to ½ teaspoon in batter and dough. Use xanthum gum for cookies, cakes, pastry, muffins, and brownies.

Psyllium husk is the husk or outer coating of psyllium seeds from the Indian Plantago plant. They are a source of fiber, creating a gel when combined with water.