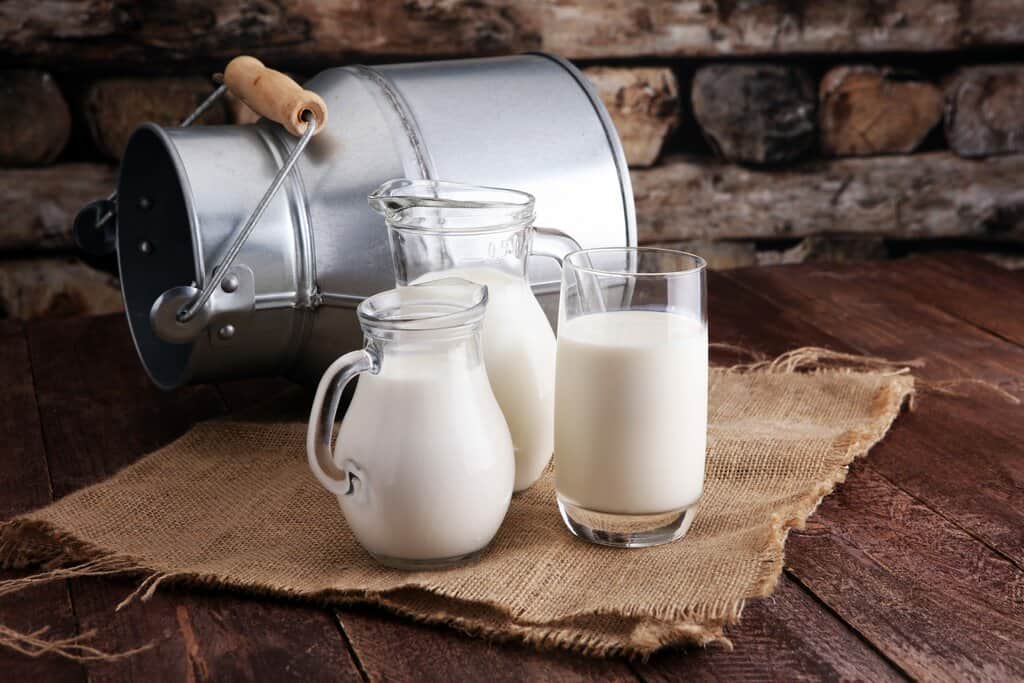 What can I use instead of whole milk in baking? The best substitutes for whole milk are other dairy products, like half-and-half, cream, sour cream, yogurt, buttermilk, evaporated milk, goat, sheep, and camel milk. The best plant-based substitutes are soy, almond, and oat milk.

Whole or full-fat milk adds moisture, tenderness, and richness to baked goods. The protein and fat in the milk do this magic, so any substitute must do the same. Choose alternative dairy products or plant milk if you are vegan or allergic. Here are the 10 best substitutes for whole milk in baking.

The most practical substitute for whole milk in baking is half-and-half since most people will have some in the refrigerator for coffee.

Half-and-half comprises 50% whole milk and 50% heavy cream, so it is a richer product than full-fat milk: it contains 12% fat in contrast to the 3-4% fat in whole milk.

Substitute half-and-half for whole milk in equal amounts. Your bakes will have a similar texture and flavor, with a delicious added richness and moisture because of the higher fat content.

Another excellent substitute for full-fat milk in baking is cream.

Not all cream products are the same because of their differing fat content, but any of the following are suitable substitutes: double cream (45% fat), heavy cream (38% fat), whipping cream (35% fat), light cream (20% fat).

Dessert cream, however, has a thinner consistency and added sugar, so it is not the best substitute.

Replace whole milk with equal amounts of whipping cream or light cream. Because of their high-fat content, dilute heavy cream and double cream so that half a cup of cream and half a cup of water replaces one cup of milk.

Cream will add a luscious texture to your bakes and make them higher in fat.

Sour cream is also a handy substitute for whole milk in baking.

With a 5-12% fat content, sour cream is made by fermenting or souring cream – “sour” refers to the process rather than the flavor.

Substituting sour cream for whole milk will add tenderness and tanginess to your bake.

Replace whole milk with an equivalent amount of sour cream.

You can substitute whole milk for your favorite breakfast snack, yogurt.

Like sour cream, yogurt is a fermented product, rich in probiotics.

Regular yogurt contains the same amount of fat as whole milk. With a similar tang to sour cream, yogurt will also enhance the texture and flavor of baked goods.

Fat-free yogurt is a healthy substitute, but the lack of fat will mean a less luscious texture.

The other extreme, Greek yogurt, is higher in fat and has a thicker consistency, influencing your bake’s texture, making it denser and more decadent.

Replace whole milk in baking with yogurt in a cup-to-cup substitution.

If you enjoy a tangy flavor in your bakes, substitute buttermilk for whole milk in baking.

A somewhat old-fashioned ingredient, buttermilk is a byproduct of butter production, being the fluid that remains once cream has been churned. Therefore, it is a low-fat product, containing less than 3% fat.

Buttermilk has a rich, sour flavor from the lactic acid produced by fermentation. Lactic acid adds an incredible fluffiness and rise to baked goods (which is why it’s so good in pancakes).

However, if you want to substitute full-fat milk with buttermilk in baking, consider that the lactic acid will react with baking powder and upset the acid-alkali ratio and hence the leavening process.

Substitute equal parts of buttermilk for whole milk, but replace two teaspoons of baking powder with ½ teaspoon of baking soda for every cup substituted.

A store cupboard substitute for whole milk is evaporated milk.

Evaporated milk was developed as a long-life, shelf-stable milk substitute, not requiring refrigeration and stored in cans or cartons.

It consists of whole milk from which more than half the water has been evaporated through heat. (Powdered milk is what you get if you remove all the moisture from milk.) Because of the heating process, evaporated milk has a slightly caramelized, sweet flavor.

Evaporated milk differs from condensed milk, which is even sweeter.

Condensed milk is also milk from which moisture has been removed, but sugar has also been added. It is therefore not a good milk substitute in baking.

Milk from goats, sheep, or camels is also an ideal whole milk substitute.

People who suffer from lactose sensitivity, intolerance, or allergies can often tolerate other dairy milk.

With similar nutritional profiles to regular milk, alternatively sourced dairy milk does have a different flavor to cow’s milk, being far more aromatic and herbaceous. This flavor will permeate your baked goods.

However, it won’t influence the texture of your bake; sheep’s milk will make it even more luscious as it is slightly higher in fat.

The best plant-milk substitute for whole milk in baking is soy milk.

Soy milk is made from soybeans and is often fortified with additional vitamins and calcium to make it as nutritious as regular milk.

This vegan-friendly milk is suitable for people with lactose allergies and intolerance.

In terms of texture, soy milk’s creaminess is similar to whole milk, while the flavor is pretty neutral once combined with sugar, eggs, and other baking ingredients.

These characteristics make it an ideal milk substitute, as the final texture and flavor of the bake will remain the same.

Another plant-based milk that you can use to replace whole milk in baking is almond milk.

Made from pulverized raw or roasted almonds and water, almond milk is trendy among vegans, especially as it is low-fat.

However, almond milk contains very little of the actual nut and is, therefore, low in protein and most other nutrients. Like soy milk, it is often fortified.

The texture of almond milk is very watery compared to whole milk, while its flavor is sweet and nutty. For added sweetness, use flavored almond milk.

You can substitute almond milk 1:1 for full-fat milk in baking, but the differences in composition will mean that the bake won’t brown and may bake more quickly.

Oat milk is the third plant-based milk that makes a suitable whole milk replacement in baking.

Oat milk contains oats and water, resulting in a healthy, high-fiber beverage with plenty of vitamin B.

The thick, creamy texture of oat milk and its mild, toasted taste are appealing as substitutes for the texture and flavor of whole milk in baked goods, especially chocolate muffins and gingerbread.

Make sure you use a “full-fat” equivalent of oat milk, or else your batter may separate, and the texture of your bakes may turn out gummy. For this reason, avoid using oat milk when baking bread.