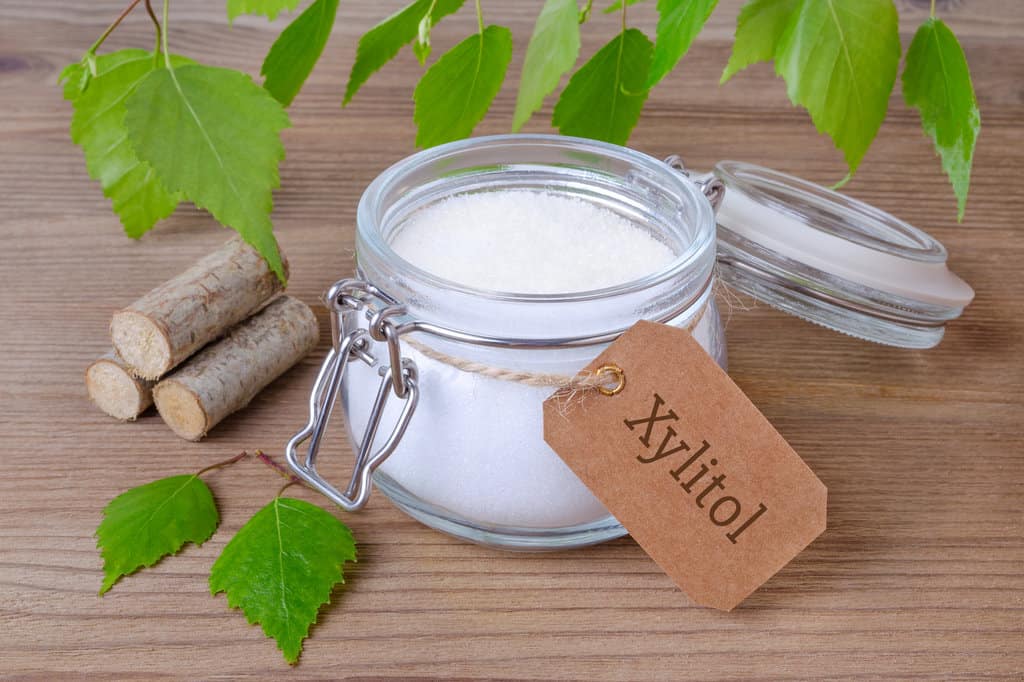 What can I use instead of xylitol? The best substitute for the no-calorie sweetener xylitol is erythritol, another sugar alcohol. Zero-calorie artificial sweeteners, like sucralose and Ace-K, are also suitable. Choose zero-calorie (stevia, yacon syrup, and monk fruit) or low-calorie natural sweeteners (coconut sugar, honey, maple syrup, and molasses) as alternatives.

People following a low-calorie or sugar-free diet turn to sugar alternatives because of diabetes, weight loss, or lifestyle choices. Xylitol is a popular non-sugar sweetener but isn’t always available. We recommend these 10 substitutes for xylitol.

The best substitute for xylitol is erythritol, another sugar alcohol.

Sugar alcohols are a natural substance found in fruit and vegetables. Through fermentation, manufacturers extract erythritol from these plants.

“Alcohol” is a chemical term – erythritol is suitable for those who avoid alcohol.

The advantage of erythritol over regular sugar is that it contains no calories, does not cause insulin spikes or raise blood sugar levels, and supports healthy teeth. Unlike many artificial sweeteners, it has no aftertaste.

Use erythritol powder as a 1:1 substitute for xylitol to sweeten beverages. Halve the amount for baking as erythritol dries out and crystallizes in baked goods.

Eat goods baked with erythritol on the day of baking.

Another helpful substitute for xylitol is sucralose, well known by the brand name Splenda.

Sucralose is a common synthetic or artificial sweetener which contains no calories and is 600 times sweeter than sugar – you need very little to sweeten food.

Although there are concerns about the safety of artificial sweeteners, sucralose has received approval from the American Food and Drug Administration (FDA).

They rendered it a safe sugar alternative for people with diabetes or those looking to restrict calories.

There are several sucralose products, including those for sweetening beverages and baking granules.

An advantage of sucralose is that it is heat stable, so it heats very successfully.

The disadvantage is that it lacks the bulk and moisture of sugar, so you need to add milk powder and baking soda to improve your baked goods’ texture.

Use sucralose in identical amounts as you would use xylitol in beverages and baking.

Like sucralose, acesulfame potassium (Ace-K) is an artificial sweetener. Typical brand names are Sunett and Sweet One.

The synthetic sweetener is 200 times sweeter than sugar, so you need very little to sweeten a beverage or dish.

Another advantage of Ace-K is that it is heat-stable, making it ideal for warm beverages. However, it does not have the same bulk as regular sugar, so it is unsuitable for baking.

Replace equal amounts of xylitol with Ace-K in beverages.

Stevia is a good alternative for xylitol, being a natural rather than an artificial sweetener.

Stevia comes from the leaves of the Stevia rebaudiana plant, which has been used for centuries to sweeten food and for medicinal purposes.

However, refined stevia can impact digestive health, so it should be consumed in moderation.

Substitute stevia for xylitol in beverages, with one tablet equaling one teaspoon of xylitol.

Stevia is not ideal as a xylitol substitute for baking, as only a teaspoon of stevia is as sweet as a cup of sugar. Reducing the ingredient so much means loss of texture, moisture, and browning.

Another natural sweetener that can replace xylitol is yacon syrup.

Yacon syrup derives from the yacon plant, indigenous to the Andes Mountains in South America. Yacon also comes in flake form, to add to granola or as a snack.

Apart from its benefits as a sweetener, yacon syrup contains soluble fiber and probiotics that are good for gut health. However, overconsumption of yacon syrup can cause digestive issues.

Use yacon syrup in equal amounts to xylitol for baking and to sweeten beverages.

Another natural sweetener is monk fruit extract, an excellent substitute for xylitol.

Monk fruit extract comes from the Southeast Asian monk fruit and is twice as sweet as sugar.

The benefits of monk fruit extract are that it is carb and calorie-free, helps maintain blood sugar levels, and reduces inflammation.

Pure monk fruit extract is not suitable for baking as it does not have the bulk of sugar and loses flavor under heat. Use this extract instead of xylitol if making uncooked desserts.

Monk fruit is also available as crystals, usually combined with other sweeteners, including sugar, so check the ingredients before purchase.

Look for monk fruit extract combined with erythritol, which is better for baking.

For those looking for low-calorie rather than zero-calorie alternatives to xylitol, coconut sugar is a healthy substitute.

Like palm sugar, coconut sugar derives from the sugary sap of a species of palm tree.

Because it is made from the tree’s sap, not the coconut itself, coconut sugar doesn’t taste like coconut. Instead, it looks and tastes like regular light-brown sugar.

Coconut sugar’s advantage over regular sugar is that it contains inulin, a fiber that slows glucose absorption, giving it a lower glycemic index.

It also has high levels of zinc, calcium, iron, potassium, and antioxidants.

Use coconut sugar in a 1:1 ratio to replace xylitol.

Honey is another healthy substitute for xylitol, although it is not zero-calorie.

Raw honey is a natural product that bees create from flower nectar. The bees break down the nectar into simple sugars that contain valuable nutrients like royal jelly, propolis, amino acids, and pollen.

The oldest sweetener, honey is also known for its anti-inflammatory and antibacterial properties and is seen as a natural medicine.

However, once honey has been pasteurized and filtered, it loses many health benefits, so always look for raw honey.

Honey has a similar impact on blood sugar levels as regular sugar, so it is not suitable as a sugar substitute for people with diabetes or blood sugar issues.

Use raw honey instead of xylitol for recipes that don’t require much heating – high temperatures destroy honey’s nutrients.

Honey is ideal for sweetening beverages, drizzling on veggies, and in salad dressings.

Pure maple syrup is an excellent substitute for xylitol, although it does contain calories.

Look out for pure maple syrup – maple-flavored syrup is corn or sugar syrup with artificial flavorings that has none of the benefits of maple syrup and the same impact on blood sugar as regular white sugar.

Unlike honey, maple syrup does not lose its nutritional value when heated, making it an excellent substitute for xylitol in cooked and baked dishes.

Another healthy substitute for xylitol is molasses.

This thick, dark liquid, which comes from boiling down sugar, contains nutrients like calcium, iron, selenium, and potassium.

The most nutritionally dense variety of molasses is blackstrap molasses. However nutritious, molasses is a sugar product, so it is not suitable for those with diabetes.